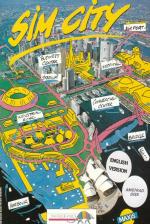 Five minutes is a long time in politics. About three years, to be precise - at least, that's the case when you're playing Sim City. It's exactly what it says it is - a city simulator. Now that may sound like a bit of a daft idea for a game, but just wait 'till you sit down to play it!

If you've ever felt annoyed about the local disco being turned into a bingo hall, or a car park being built in the middle of a local beauty spot, then now's your chance to prove how you'd handle the situation. As the town's new mayor, there's pressure on you from all sides. You're well and truly in the hot seat.

Mind you, in Sim City you're given almost god-like powers and (more importantly) a $20,000 budget with which to build and run your city. It's down to you to make all the decisions. Where to put the roads and buildings, at what level to set the taxes, and where to develop housing, commerce and industry.

You start off, though, with a barren landscape. It consists of ground, forests, and water. Obviously you can't build anything in the water, and forests need to be knocked down before building can commence.

There are three types of development that you can build. Residential blocks are where the people live. Commercial centres are where offices and shops are based. Industrial zones are where the factories go. As well as these basic social building blocks, you'll need to provide essential services to keep every-thing ticking over. Roads and public transport allow the citizens to get from A to B. Electricity is needed too, so power lines will need building. And, of course, you'll need a power station (coal or nuclear - the choice is yours) to put power into your national grid.

You can't just slap the whole lot down haphazardly, though. (Well, you can, but the population won't like it.) A successful city needs careful planning. You need enough factories to keep the residents in gainful employment, so that they will support the commercial centres, which in turn ensure that industry can sell its goods. It's a very finely-balanced equation. Get it wrong and employment will soar, shops will shut, and factories will close.

You don't actually put up these buildings yourself, mind, you only designate what sites are to be used for. It's up to the people them-selves to decide whether it's worth building or not! So if you do set aside an inappropriate plot for commerce, then no-one will move in and it will remain desolate and empty.

People like to live in nice places. Coastal areas are firm favourites, as are picturesque lake-side settings, and dwellings in forests. Build a residential area next to a nuclear power station or smelly factory, and it won't be a popular place at all.

Basically, however, the nicer a place is to live in, the more expensive it will be to live there. The same applies to industry and commercial enterprises - the better they're served the more they'll be sought after. And the more prestigious the area, the more you'll make in the way of taxes, as the people living (or working) there will be rich.

Housing has to be provided for poor people too, though. If all the housing available is in the form of luxury apartments, people will become disillusioned with the sky-high house prices. Instead, you could make a few slums for the scallies, next to factories and the like. But the ungrateful geeks will then complain about pollution and things. You just can't win, can you?

First thing to do is give your town a name. This will probably depend on your mood. You could name it after your home town, or even call it Swindon.

Next select the level of play. The difficulty determines how much dosh you get at the beginning of the game, and how fussy the public are. The Easy level is indeed easy, and after a couple of plays you'll go for Hard every time.

The landscapes the computer generates are different for every game. And all the scenarios take place on islands, so there is plenty of potential for coastal resorts. Inland, there's usually a good mix of forest and lakes, providing homely settings for your citizens.

Four pull-down menus sit at the top of the screen. These cover a number of functions, such as providing maps of pollution, crime and traffic problems, allowing budgets to be set, or - for the masochistic only - switching on disasters such as earthquakes. Directly below these options there's a selection of items that can be laid down onto the landscape. Residential areas, power lines and airports are among the building blocks available.

Next, there's a general status panel telling you how much dosh you've got, the date, and also informing you of the requirements of the townspeople. Messages, presumably from your advisers, tell you of problems that the city is facing.

The remaining portion of the screen is taken up with the playing area. Here is a large-scale map of the city at work. You actually see the buildings change as the sites are developed. Traffic jams are shown as a series of lit-tle blips on the roads, and miniature trains chug along the tracks.

Before you start to build your brand new city, you'll have to select some suitable building sites. To get your city up and running you'll need a power station with electricity cables, some kind of transport system, and of course somewhere for people to live and work. These are the basic requirements, and form the starting point for any city.

As your small village becomes a sprawling metropolis, you'll face more and more problems. The rising crime rate will need combating, for example, and sooner or later the citi-zens will demand an expensive sports stadium. To see just how popular your policies are, take a look at the evaluation option. It's usually quite depressing...

Control is via keyboard or joystick. You can get by using one or the other, but a combination of both is best. The numeric keypad serves as a set of 'hotkeys'. You can select most of the options just by tapping a key. And the cursor keys can be used to scroll the map around. This makes for a quick and convenient method of zooming all over the place without having to resort to fiddly icon control.

The game does suffer in the graphic and sonic departments. The landscapes look boring, and are drawn in the most horrendous choice of colours imaginable. There's very little in the way of sound, either. Then again, neither is very important for the type of game.

Sim City scores very highly indeed in the playability stakes. It's a very unusual idea, which works wonderfully well. There's an addictive quality that just keeps you coming back again and again. It's not the sort of game you could play quickly for a few minutes though. Mind you, compared to the real thing, it all happens very quickly indeed.

They say Rome wasn't built in a day, but with Sim City you could certainly have it rounded off by the end of the week!

The graphics could be better - they're rather 'mushy' and poorly defined - but the gameplay itself is beyond reproach. It takes a while to get the hang of city politics, but once your settlement is started, the task of running it becomes incredibly absorbing.

Build a city in Easy mode.

Staying Power 88%
P. The most original, engrossing game for ages!

The most original, engrossing game for ages...! Sim City is Fun City!