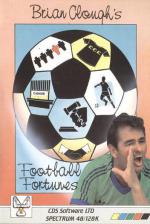 Well Brian, me and the lads got together, and well, there it was in the back of the net - something a bit different, a board game where the computer acts as ref.

Two to five players each take a team. The remaining teams are controlled by the computer, which generates a squad for each player. This consists of a goalkeeper, four defenders, three mid-fielders, three forwards and two versatile players. Versatile players can play in any position (however, their star rating is reduced to one if they play in goal). All players have a star rating between one and five, although initially, only footballers with values from one to four are issued. These are represented by cards which are given to the players. The remaining cards are then mixed together and placed in the middle of the board. Players also receive £20,000.

The computer now shakes the dice for the players in turn. Each player moves a counter round the board, landing on squares which either give penalties or bonuses. Players may also land on auction squares. When this happens, the top card from the stack of footballers is turned over. All players now bid. Sometimes players will land on a square which entitles them to only pay half price in the subsequent auction.

Footballers can be sold or loaned between players. When this happens, the squad is rear-ranged to give the same 1-4-3-3 formation with which it started. After all the players have made a move on the board, a round of matches is played. Players type in the total attack and defence strengths of their squads. The attack strength is the total star rating of the attack and midfield players; the defence is the sum of the defenders and the goalkeeper. After that, the computer works out the results of the matches. Players then receive gate money, depending on how interesting the fixture was.

Play then alternates between a move on the board and a match. Apart from adjudicating the matches, the computer holds a list of the cards for 'selection problems' and 'manager's luck'. Should a player land on one of these squares, the computer 'turns over' the next card, and the manager follows its instructions. Some represent cash penalties, so it's important not to overstretch yourself by bidding too highly in the auctions, or there may be insufficient funds to cover a penalty. If the penalty can't be met by selling footballers to other players, the manager is bankrupt and out of the game.

Players can check their current league position from the program's main menu, they can also inspect the last cards drawn and the last or the next league fixtures.

Control keys: menu selection, 0-9
Joystick: none
Use of colour: hardly any
Graphics: a series of menus and printed results
Sound: none
Skill levels: four
Screens: 20

'Golly! Football Monotony with a computer to keep score. I was wondering how long it would be before something like this came along. I've played this a fair number of times over the last few weeks, and I think it's boring. The overall package is spoiled by the software (more than likely written in BASIC) which runs painfully slowly and looks 'unfinished'. I'm sure that the game would be as much fun it the whole computer idea was dropped and its job was replaced by a couple of dice, a set of chance cards and a score pad. For the price this may interest board garners, but I wouldn't recommend it.'

'In the past CDS have always come out with some good thinking-games. However, Football Fortunes requires very little thought to play. It's just a case of whoever gets the first few half price auctions is well on the way to winning the game. The computer side of the package contains a very shabby bit of software. Overall I would say that Football Fortunes is too over-priced to enjoy playing for long. As a computer game it contains little appeal to validate the large asking price.'

'Is this one for the board gamers or the bored gamers I ask myself. This is neither a particularly good game or a good computer program. The computer side of it runs very slowly. There seems to be far too much luck involved, once one person gets ahead it's almost impossible to stop them as success leads to more success. It might provide a bit of fun for an evening or two, but that's not much for this sort of price tag. Sorry Brian, I'm going to kick this one into touch.'

Sorry Brian, I'm going to kick this one into touch.