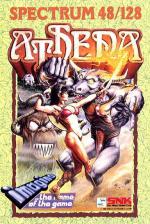 Voluptuous Athena, goddess of wisdom - worra woman. Tired with the everyday life of cleaning her heavenly home, our bikini beauty decides it's about time she got involved in a bit of the old heroic dealings. So off she sets to battle her way through six levels of forest, ice, land, sea, sky and hell.

Our heroine is no dumb blonde - this girl can jump, duck and run through these strange multilevel arenas, facing perilous odds as bizarre beasties attack her. Peanut men advance, demons close in, apples fly through the air, and armadillos swing into action.

By giving a good kicking to the first bad guys she meets, Athena can gather their weapons and, armed with perhaps an axe or a ball and chain, move on with a little more confidence. She scores points for every creature she thumps to death.

Our dynamic damsel's weaponry can also be used to demolish the rocks and blocks that make up the landscapes. This reveals some useful objects for Athena's arsenal - and some deadly ones, so look out. Athena can also collect wings and fins to speed her on her dangerous way.

But the beasts reduce Athena's life force (you knew there was a catch), and she has only five lives. To restore her vitality, the curvaceous fighter can destroy roses, which release collectable hearts.

The goddess with gumption can leave each world by battling past a large and mighty sentinel, but wimps are advised to seek the other exit. And hurry - on each level a time countdown limits our heroines's scope for slothful perambulation.

Joysticks: Cursor, Kempston, Sinclair
Graphics: small, neat, but monochromatic
Sound: lots of imaginative effects and tunes
Options: if you die on one of the first five levels, you can continue from the same point with a new set of five lives (the carries on, though) - up to15 extra lives can be wangled this way

'Athena could have been very good - with rigorous playtesting. But as it stands the game is unplayable and unappealing. The graphics, small but neat and nicely animated, go a long way to redeeming it, though they do flicker occasionally. The sound is also well above average, with loads of good tunes and atmospheric effects crammed in. But you'll have to look elsewhere for a decent heroine…' B

'Wow! Athena has all the qualities you expect of a good arcade though it's a bit too hard. The shading is excellent, and there are some really lovable characters - I liked the hooded ghost and the big-nosed ogre. This is simply an excellent game.'

'Athena is definitely not for the arcade novice - it's an excruciating challenge to beat, through level after level of madcap violence. I needed all Athena's 15 lives to survive the first three levels! Graphically good and addictive, Athena is worthwhile for fans of the original and all hardened arcade players.'

Graphically good and addictive, Athena is worthwhile for fans of the original and all hardened arcade players.