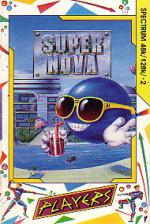 For every holidaying robot who wants to toast its circuits, the Supernova Hotel on planet Antares is the only place to be. There's a snag, of course... money. Such a stay doesn't come cheap, but ROBOT, an impecunious automaton, decides to take advantage of the lavish facilities anyway.

At the end of his stay, ROBOT can't pay his bill, but till he does he can't leave Antares. With homesickness welling inside him, the freeloader knows he has to accumulate cash.

ROBOT begins the monetary quest in the main reception and administration areas of the hotel. From here he can pass through unlocked doors, and use lifts to reach other sections of the hotel: they include a security room with a safe. an arcade-game room, a sports hall, a chemist's and stationer's and, importantly, the guests' bedrooms. ROBOT can enter locked rooms only after finding the appropriate key.

In some of these rooms are lockers that contain items useful in the quest for increased funding. ROBOT can access lockers, examine their contents, take and carry up to eight items at once. These objects can include door keys, food, flour and glasses.

Supernova first featured in CRASH Issues 29 and 30, as homegrown software.

'The graphics really are good, with the little ball-like character moving well, though the scrolling is a mite jerky. The different levels and objects spice the game up and boost addictiveness; I especially liked the arcade level. Supernova is a brilliant game, let down just a touch by its speed and sound.'

'I'm very surprised Supernova wasn't snatched up by some budget label ages ago; it looked excellent as homegrown software about a year ago. It's nice, too, to see that it's still appealing and compelling, which isn't so usual for budget games of this genre. The presentation's great; a good tune plays throughout the game, nice screen layout and some pretty graphics help. Recommended...'

'I enjoyed Supernova when it first came out, but now the poor music and graphics on a small playing area disappoint me.'

Recommended. The presentation's great; a good tune plays throughout the game, nice screen layout and some pretty graphics help.