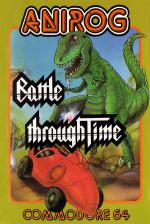 This is a classic shoot-'em-up game, the kind that has you reaching straight for the auto-fire switch on your joystick, if it has one. You have control of an all-terrain plasma tracked vehicle - in other words, a small car which can jump over obstacles. You can shoot forwards and upwards to destroy an assortment of planes, satellites, mutants, dinosaurs and what-have-you.

There are seven zones, each represents a different war, and you have to cover ten miles of each before being transported to the next.

Though the concept is simple, the game is quite difficult to play. It's easy to fall into a shell-hole while trying to evade the bombs being dropped on you. If you speed up to avoid a falling plane you may fail to shoot away a boulder before you crash into it.

Fortunately, you can start each game from the point where the last one ended, so you stand a fighting chance of seeing all the zones.

The graphics and sound are well up to standard, and it should keep you zapping happily for several hours.

The graphics and sound are well up to standard... It should keep you zapping happily for several hours.