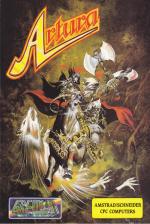 Once upon a time, there was a sword called Excalibur that lived in a rock. It may seem an odd place for a sword to live, but some stupid idiot shoved it in there for a bet. There was a rumour going around that the person that could pull the sword out of its rocky scabbard would be a really nice guy and an ideal candidate for king.

Needless to say, there were many people willing to suffer the awesome responsibility of being king (the great wealth and possession of a kingdom being even more important!). Eventually a wimpy guy called Arthur dragged the sword out and said "Where's me castle then?" And so the legend of King Arthur was born.

Artura is based on this legend and set in the kingdom of Albion (doing ever so well since Atkinson left, by the way - Ed). Albion is in a bit of trouble at the moment and to get out of it the sacred treasures of Albion must be collected and only Merdyn the Mage knows where they are. Merdyn has mysteriously vanished and his apprentice Nimue is being held prisoner in the castle of Artura's half sister, Morgause.

The screen is split into two bits: a flick screen playing area in which Artura wanders around and a panel at the bottom that shows your energy, score and runes carried. Energy decreases every time you come into contact with one of Morgause's many minions.

Morgause's castle is made up of many rooms that are usually split into two levels of floor. Movement off either side of the screen is possible and doorways lead into and out of it. Strewn around the castle are runes and health-restoring objects to aid you in your rescue mission.

Rats, ghouls, spiders, soldiers and cute little birdy things all want to stop you from finding the runes and freeing Nimue. Fortunately, they don't like you throwing things at them; in fact, it can be very fatal for them, and it doesn't hinder your score either.

On the title screen there's a nice tune that has a certain Arthurian sound to it, but there are none in the game itself. Sound effects are limited - just the impact of your weapon on enemy flesh and the sound of them dying after several hits. Although lacking in colour, the graphics are detailed and animation of them is good if not mind-blowingly superb. (Gargoyle still hold the title for the best animation of big characters, but at least Gremlin tried!)

There's a large playing area to explore and plenty of foes to kill, though it's a pity they're so thick. It's a game that demands mapping and people will be grabbing for sketch pads before they get anywhere in the game.

Artura looks good. though the animation's jerky. And you're kept on your toes by the warriors as you pursue your objective. If you want a mix of Lap Of The Gods, Manic Miner and The Shining then Artura fits the bill.

Overall 75% Better than Gremlin's recent attempts, but not quite a Rave.

There's a large playing area to explore and plenty of foes to kill, though it's a pity they're so thick.