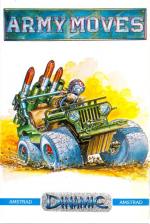 There are two games from Spain in the issue, this one and Livingstone, with more promised for later in the year. The evidence so far is that it could be as fruitful a source as France. Army Moves is by Dinamic and certainly has some excellent graphics, but does have some gameplay problems.

It's a seven-part battle to raid an enemy headquarters, loading in two sections of four and three stages. Straight away I should reveal that we had a cheat version; otherwise I wouldn't have got off the first stage, a problem that I'll get back to later.

For stage one you drive a jeep across a damaged bridge. Stages two, three and four put you in control of a helicopter. You're on foot in stages five, six and seven for the final assault. With each mode of moving you have two different types of weapon, both of which you'll need frequently.

The bridge has three dangers: helicopters, jeeps and gaps in the bridge. Use ground-to-air missiles, ground-to-ground missiles and jumping respectively. The three helicopter stages pit you against fighters, with the added danger of missile silos, submarines and gun turrets. The chopper is armed with bombs and air-to-air missiles.

The final stages on foot take you through a jungle swamp, where you have to leap along stepping stones, cross a heavily defended compound and find the safe in the enemy headquarters. Your weapons are a machine-gun and grenades, against jungle birds and lots of enemy soldiers.

The graphics on all the stages are excellent large colourful sprites and smooth horizontal scrolling. The problem is that on the early stages it's virtually impossible to succeed. Not only is it difficult, but you get returned to the start every time you die. The twin fire buttons are also a problem. I ended up playing with joystick, my big toe operating the spacebar as the second Fire button.

The foot stages get easier, but you may never get there. The gameplay also gets repetitive; hammering away at the Fire button will wear out many fingers, never mind strain the stick. A good game but very frustrating.

The graphics and animation are delightful. The explosions and their accompanying sound-effects are satisfying. A polished game in almost every aspect - except its unplayability. It's just too hard. How anyone is supposed to complete the first stage without a poke is beyond me. Still, it's worth a look.

Grab Factor 52%
P. Far too difficult in the early stages.
N. Restarts the stage every time you die.

A polished game in almost every aspect - except its unplayability. It's just too hard.