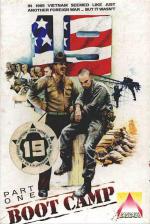 N-n-n-n... and so on. Actually it's quite hard to get out of the habit of n-n-ing all over the place when talking about this game, and it'll get even worse when part two pops up later in the year.

Eh? I hear you cry. Part two? Yes, Cascade knows where its bread is buttered, and I'd say it's on the side that's not stuck to the carpet. Why write just one game from an expensive and potentially lucrative licence, when you can do two... three... four... or even 19?

This one's the first, though, and in many ways it's typical of Cascade's games - not bad, perfectly playable, but just lacking that killer touch to make it a real humdinger. Part One is subtitled Boot Camp. It's a course in basic training, the results of which you can take through to the next game to help you survive against those slithery Viet Cong. Which means four parts, each entirely separate, but all of which 'take you through a series of exercises each assessing different characteristics: co-ordination, stamina and morale', as the blurb tells us. Sound like Combat School to you? Yes, it does to me too.

Fortunately the game's designers and programmers have avoided the temptation merely to ape that splendid Imagine title, and have tried to do something a bit different. It certainly succeeds in that but as a game (or rather series of games) I'm not so sure. There's too much here that's been done better elsewhere.

Stage One is the Assault Course, a far more complex and challenging test than in Combat School (one notable difference between the two is that you don't have to qualify as such for the next round - you get to try out all four rounds but your achievements and points in each are added up to make up your final score and rating). Running is straightforward enough - you just press right - but jumping is incredibly difficult. To get enough power you have to keep fire pressed down for half a second or so, and let go just as you reach the correct spot in front of the obstacle. Fine in theory but in practice, very tricky indeed.

Stage Two is far more user-friendly. Here you have a shooting range set in a forest, the lighting low, with targets popping up before you which you have to pop off. Or at least some of them you do, because mixed in with the genuine targets (soldiers) you'll also see women and children. Hit a soldier and you'll get up to 50 points, hit a woman and you'll lose 1000. It all makes for a stern and very addictive little test, with eight such ranges to get through.

Stage Three, Jeep Training, isn't bad either, although it's all a wee bit familiar. There can't be many other game companies who would dare being out a car racing game on the Speccy, but this one's perfectly respectable as far as it goes. Here you worry more about missing obstacles left in the road, as well as picking up useful things like ammo boxes, jerry cans and, for some reason, boots.

Stage Four, Unarmed Combat, is a return to Dullsville. It's Fist time again, except that it's rather shoddily programmed and incredibly boring to play.

So, a mixed bag. Of the four bits, two are all but redundant, one's okay, and it's only the Shooting Range that's really special. For a tenner, you do expect more than a 25 per cent success rate. Which is, of course, better than a mere n-n-n-n-n-(Oh shut up. Ed).

Well-hyped package that has its moments but lacks sparkle. At least you can switch off the music!

Well-hyped package that has its moments but lacks sparkle. At least you can switch off the music!