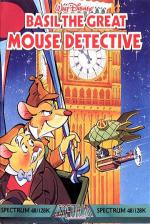 Oh sorry, I forgot the ™. Basil's another of those 'properties' that starts as something humble like a film and soon turns into a t-shirt, video, ice cream flavour and eventually computer game. Remember we're talking Disney here, so Gremlin assures me that the game has been designed with the younger gamer in mind. Does that mean I've got to be nice to it? No? Oh goody.

So, from the basement of 221b Baker Street, Basil must rescue his loyal friend Dr Dawson, who's been kidnapped by the evil criminal masterrodent Professor Ratigan. The trail leads him through London's sewers and dockland, looking for clues (ooh-wah) which are usually hidden in pots, jars and the like. There are three 'scenarios', and you must collect five clues to progress to the next one. Trouble is, Prof Ratigan has hidden eight false clues in each 'scenario', and you can only deduce which clues are kosher when you've collected five. In the meantime there are nasties to be avoided, or nabbed with mousetraps, and there's occasionally cheese to eat.

Which is fine in theory, but to be frank, or indeed marcus, this is not up to Gremlin's usual standards. After the splendours of Nipper II, Basil's a mere mouse by comparison. Graphics are rather less colourful and well drawn, too many screens look too similar, and gameplay is monotonous. Does this mean that younger players will enjoy it? I'm not sure, but I doubt it. It's not that easy to play, in fact, but that doesn't make it any more addictive. Basil isn't abysmal, by any means - it's just bog standard, and that's disappointing from Gremlin. File under 'Not quite.'

A disappointing platform runaround that pales besides Gremlin's own, thoroughly skill Jack The Nipper II.