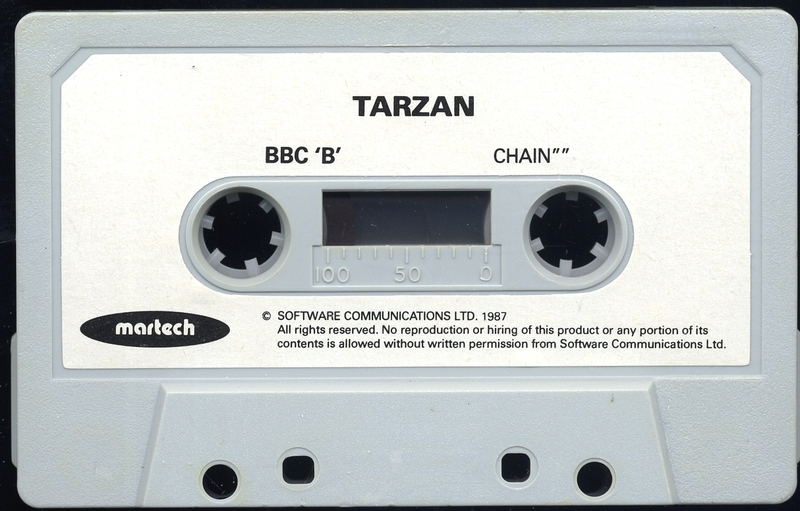 Search the jungle for sacred stones and recover them before the sun sets on the third day.

Legend speaks of a child captured, then raised by the Apes...

From the Western coast of the Congo, to the palm-fringed shores of Zanzibar in the East, African folklore tells of the legendary exploits of one man - Tarzan of the Apes.

Nursed at the shaggy breast of Kala, the she-ape, the white orphan child had grown to learn the ways of the jungle and the language of the beasts. Years later he claimed the inheritance was rightfully his, as John Clayton, Lord Greystoke, Peer of the Realm, but whenever necessity demanded the polished Englishman would revert once more to the naked ape-man.

For Tarzan - or, as the apes called him, Tarmangani - held a deep contempt for his native society, in which he had found greed and cruelty far beyond that which he had known in the savage land of his adoption. Where the myriad life trod the matted vegetation, or flew or swung or climbed amongst the leafy vaults of the great trees, here it was that Tarzan ruled supreme, Lord of the Jungle.

And now, yet again, needs drove him to shrug off the thin veneer of civilization and brave the preils of the forest. Lady Jane Greystoke, she who he had won by the might of his steel thews, was in danger.

Held captive by Usanga, chief of the Wamabo, she was to be fed to the devouring maw of Sheeta the Panther and the rapacious talons of Ska the Vulture, if Tarzan failed to retrieve the seven gemstones which had been stolen from the tribal shrine. These stones, believed by the Wamabo to be the Eyes of the Rainbow, were of differing iridescent hues, one for each colour of the spectrum. In his rage at their loss, Usanga had given Tarzan but three days in which to find them, or Jane would be sacrificed at sunset on the third day.

As he swung through the tangled forest, Tarzan had spoken with Manu, the monkey, as the grey-bearded creature had recounted how others of his kind has mischievously taken the precious stones, and scattered them far and wide amongst the shadows of the dank jungles.

Tarzan knew that he must travel without stint hunting the jewels in the heat of Kudu the sun, and by the light of Goro the moon. His quest would take him to the dark caves of the rocky steppes, wherein dwelt bloated spiders and unearthly flames, and to the lichen-covered walls of the Temple of the Sun. He would traverse the swampy morasses and the treacherous quicksand, and find Numa the lion and Histah the snake. He must beware the poisoned spears of the Kurotawi, and the rifles of white hunters.

However keen his senses, however mighty his muscles, he was still mortal. Though he might find numerous artifacts to help him, though he might call upon the friendly monkeys to help him, he was still limited by inexorable time. He knew he possessed sufficient strength and cunning to battle against Death and win, but the hazards of the jungle, the bite of Histah the snake and the clinging embrace of quicksand, all would conspire to hinder and delay.

Time was his greatest enemy. Before Kudu sunk in the west on that third fateful day, Trazan must return the Eyes of the Rainbow to Usanga and discover the forest prison that held his beloved Jane.

His eyes narrowed, his muscles tensed, and from his mighty chest arose the savage tormented cry of the bull ape...

The child became a man - and Lord of his jungle domain.

As time passes, the sun wil slowly sink in the sky. The jungle will pass through sunset into shadowy night. If Tarzan survives the night, the dawn will give way once more to the heat of day.

The time it takes for three days to pass depends on how successfully Tarzan can avoid or overcome the many hazards he will encounter. For example, every time Tarzan is hit by a spear, or falls into quicksand, a period of time will pass more quickly. If Tarzan is careless, therefore, three days will pass very quickly.

There are various objects (both animate and inanimate) which Tarzan may come across. These will also appear on the screen as black boxes (look carefully for these, they may be partially hidden somewhere on the screen).

If Tarzan is able to pick up any of these, then a picture of the object will appear on the bottom left corner of the screen.

Monkeys, rope, torches, different coloured shields and sunstones are just some of the objects Tarzan may find useful to have with him. To use some objects, it is necessary for Tarzan to drop them in the chosen location.

Tarzan can move left or right until faced by impentrable rock. He can also move up or down through any gaps in jungle undergrowth, rocks, walls, etc (these gaps are not always easy to see, they may even be completely hidden from view).