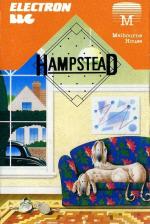 Hampstead scores well for original and amusing content, but suffers from a number of technical deficiencies in construction which I believe will irritate the seasoned adventurer. Read Review

Well up to Melbourne House's usual high standards... There aren't many adventures where a Sony Walkman is considered an essential object! Read Review

In too many places I felt the authors were sneering rather than laughing. Read Review

I was left feeling somewhat baffled by this game, though I hasten to add that the problem is obviously mine and not the program's. Read Review

Hampstead is an adventure game for would-be social climbers. It is a quest but not for gold. Your aim is to reach the pinnacle of social status - to become a somebody. So lie, cheat, steal and defraud. You know it makes sense.

Reviews of Hampstead on Spectrum 48K and Commodore 64:
'Wickedly funny and highly original' - Commodore Horizons.
'The game itself is very funny, with a joke of some description around every corner' - Time Out."

Hampstead is an adventure game for would-be social climbers. For those who have never played one before, an adventure game depends on the use of brainpower. Speed of reaction isn't so important. What matters is the ability to solve complex problems, which get harder the further you proceed in the game.

Most computer adventures involve a quest of some sort, usually for hidden treasure. There will often be dragons to kill and nasty goblins to avoid.

Hampstead is a quest, but not for gold. The aim of it is to reach the pinnacle of social status, and acquiring wealth is only one part of the problem. If you wish to go up in the world, you also have to gain the admiration and respect of your fellow men, and there's more to that than a fat bank balance.

In Hampstead, it helps to know something about art - or rather, to give the impression you do. You must wear the right clothes, be seen in the right places, live in the right house with the right partner and use the correct mode of transport. You must meet the right soft of people and say the right things to them.

Although the old school tie never does any harm, your most important tool is simply the ruthless and skilful use of your natural cunning. At the start of the game you are a nobody whose aim is to become a somebody. So lie, cheat, steal and defraud. You know it makes sense.

The crucial point to remember at all times is this: you cannot attain Hampstead just by going there. Your task is not merely to visit the place but to become a Hampstead person. Hampstead people may seem terribly casual, as if anything goes, but frankly you will not be invited into their homes unless you are quite clearly one of them.

As the adventure begins, you are sitting around at home in your dingy little house. You have nothing.

As you go and sign on to the dole, make sure you're decent and have some means of getting around. It is advisable to explore as much of your immediate area as possible since you will find things that later prove useful. Some of the things you find may seem useful, but aren't. And some of the things which at first appear useless may actually turn out to be rather vital.

When the program is fully loaded, you will find yourself in a dingy flat somewhere in north-west London, watching "3-2-1" on television. This really is a depressing, degrading position to be in, so get moving immediately.

To get mobile, socially and physically, just use the simple compass directions north, south, east, west. Sometimes you can go north-east, north-west, south-east or south-west. You will also occasionally need to go up or down. All of these movements can be abbreviated thus: N, S, E, W, NE, NW, SE, SW, U, D.

This system applies whatever your mode of transport is, be it foot, bicycle, train or car. There are places where transport is essential and where you are better off on foot.

Apart from movements, most of your commands will be in the form of VERB NOUN. You will frequently wish to pick up things or put them down, e.g GET KEY, DROP KEY. If you want to investigate your surroundings more closely, SEARCH ROOM/OFFICE/SHOP or whatever the location.

Don't forget that doors, gates and the like can be opened and closed, locked and unlocked. Sometimes you may need to get into something locked by unconventional means!

Having found an interesting object, you may wish to look at it more closely, in which case EXAMINE DOGS or READ MAGAZINE. In many cases it will take a while to discover the correct command for what you want to do...but that's part of the fun!

I for Inventory. This will give you a list of what you have with you and what you are wearing.

R for Re-describe. You will need to do this if the screen is filled with messages and commands, and you want to remind yourself where you are and what objects are visible.

QUIT if you have had enough social climbing for one day. This is how you throw in the towel until next time.

SAVE/LOAD to enable you to save the adventure up to the point you have reached and resume later. Check your computer manual for instructions.

"You are sure to find Hampstead an entertaining romp up the social ladder." Sinclair User.
"Hampstead is an excellent example of a new type of game. It's a concept." Computer Trade Weekly

Denis Through The Drinking Glass

Previous Next
Denis Through The Drinking Glass (1st November 1984) (BBC/Electron)
An incredibly strange, rhyming, text adventure in which you play Denis Thatcher, the husband of Conservative party leader Margaret Thatcher, and must remain half-drunk throughout a series of bizarre political challenges.

Previous Next
Terrormolinos (1st November 1985) (Acorn Electron)
Try to survive a hilarious family holiday on the Costa Brava in this text adventure.

To Hell In A Hamper

Previous Next
To Hell In A Hamper (1st January 2007) (BBC/Electron)
A one-room comical text adventure where you are confined to the basket of a balloon with the world's worst travelling companion.

Previous Next
Rick Hanson (17th July 1985) (Acorn Electron)
A text adventure in which you play an assassin. Your mission is to kill General Garantz, an evil criminal who is threatening to explode a nuclear bomb in New York unless he is paid a ransom.