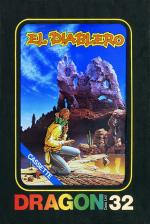 This is a really great text adventure. And, to top it all, the game has the best twist in the tail that I have ever experienced. Read Review

You awake, dazed and confused, in the middle of a desert. You have been learning the techniques of sorcery from an old man. The old man told you that an evil Sorcerer, a "diablero", had become his enemy. Now, your teacher is missing and you are alone. Worse still, you cannot remember those spells you had already learnt. However, you can remember a strange verse:

You have entered the world of El Diablero!

Here you must learn to acquire and use magical power, in order to prepare for the final conflict with your enemy.

To play El Diablero, input one or two word commands. For example LOOK AROUND, or GET BOOK. You need only enter the first four letters of each word for your instructions to be understood. To see a list of the objects you are carrying enter INVENTORY.

When a location description is preceded with the words "I AM IN DANGER!" there is only one correct response which will prevent you from being killed. There are no second chances, but there are subtle warnings, which can prevent you from getting into situations for which you are not prepared.

It is often useful to examine unusual things well. They will often provide useful hints.

This is not an easy adventure and if all else fails, a set of maps and extra clues are available from Dragon Data Limited.