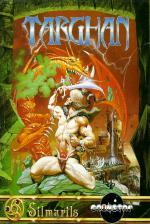 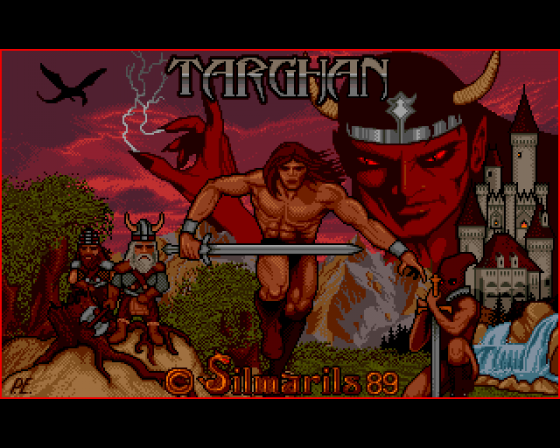 This game is possibly the only way that Gainstar could feasibly follow up the acclaimed Sword Of Sodan, and follow it up rather well it does. You are the Targhan of the title (how many other Targhans are there in the world?), son of a tribal chief, blessed with superhuman strength and fighting abilities. Since the time of your birth, there has been a terrible blight over your father's village. An evil lord has terrorised this surrounding lands, claiming all for himself and leaving poverty in his wake.

But the final straw has come. The lord's minions have killed your father in an effort to take over the village. You, a fully-grown adult by this time, swearing to avenge your father's death, and so you do.

Travel through four separate but interconnected sections as you search for the lord. Wander through the forest, avoiding attacks from bats and archers. Climb down wells to dungeons below, but remember to bring a source of light. Things tend to get a little dark without one. Climb up into the trees to battle amongst the treehouses, where elven folk attack you with axes. What do you expect, after all you are trespassing. And when you have found the castle, you have to fight the guards and find the lord, then you must destroy him. 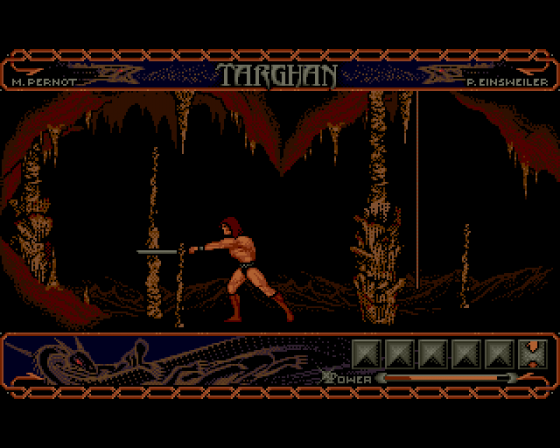 The game is viewed as a side-on, flip screen arcade adventure with some simply wonderful graphics. The backdrops are exquisite, and most of them have some kind of animation, be it a bird flying around in the distance, or a bell or lantern swinging in the wind. The main sprites are amazing. Huge and well detailed, they have to be seen. The animation isn't amazing, however. The number of frames of animation are just a little too low.

Sound is pretty good too. Lots of Barbarian-like "ugh"s and "agh"s during battle, plus suitable sampled effects as background noises add to the atmosphere.

It plays really well. I for one feel that Sword Of Sodan lacks a little bit in the playability sector, but Targhan is by no means short of fun. I had a great laugh playing it, even with the slightly disastrous multi-loading system.

The game is big, and there is a lot of variety. Certain objects might help you at times, so always be on the lookout, and don't always kill what you meet. Only attack if being attacked is usually a good philosophy. Another corker from Gainstar.

The game is big, and there is a lot of variety. Only attack if being attacked is usually a good philosophy. 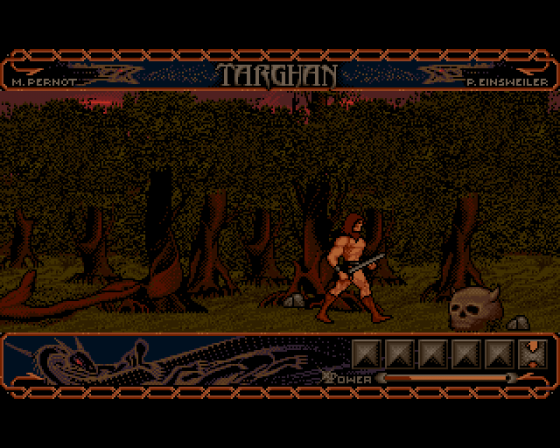 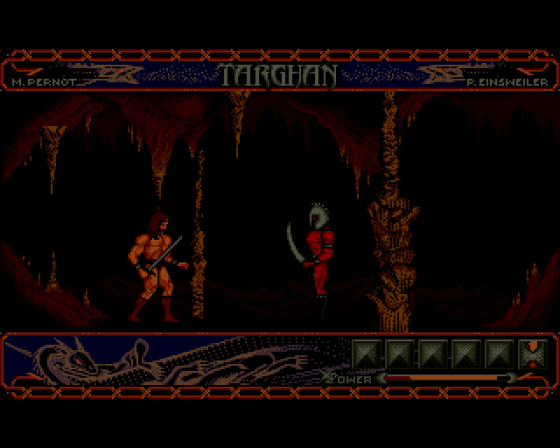