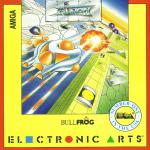 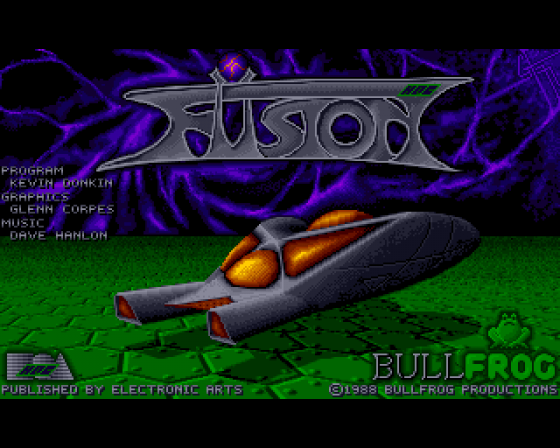 The first thing I saw about this game that I liked was the first page of Fusion's manual, which gives you a short sarcastic plot under the title of Not They Story ('The galaxy is under threat and only you in your very very small Trang fighter can save us...') and then goes on to tell you that Fusion is a game. Not a simulation of a futuristic sport, but merely a computer game with you playing it. Credit where credit's due, well done to the writer. Well, it made me laugh, anyway.

The idea behind Fusion is to traverse the many alien levels and collect all the parts of The Bomb, and then return to the start level and drop the bomb on the bomb square (recognisable because it looks like a bomb). To get to the other levels, you are going to have to do some puzzle solving.

You start on a metallic looking plateau looking out around the 360 degrees scrolling landscape of large pylons, huge holes and alien vegetation. Pathways lead off the plateau into a mazelike series of connecting paths down to ground level where, somewhere, your ship is hiding. I say hiding because if you are more than a third of a screen away, it turns on its cloaking device, rendering it invisible to all and sundry. Which, as you can imagine, makes it a bit difficult when you cannot remember where you put it. 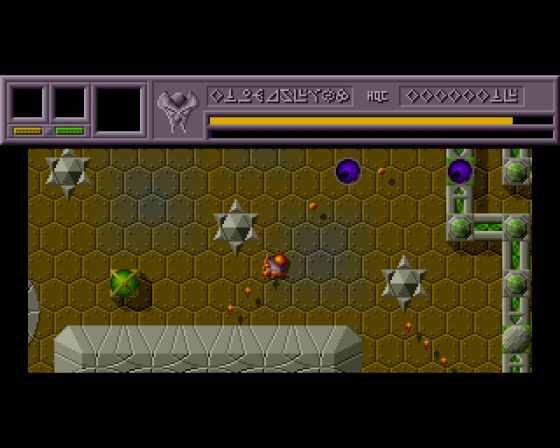 The whole point of the ship is that you can fly around at great speeds over areas that you couldn't go 'on foot', to survey the area and to get between levels. All the problem solving has to be done on foot, just like the old C64 favourite, Parallax. In fact, this game is very similar to Parallax in many ways, except of course for the ultimate aim and the bit about the scientists.

The problem solving comes in the guise of locked off areas and keys. The keys are represented by large rectangular blocks on the ground, with a geometrical shape in the centre of them, either red or green. The locks are smaller versions of the keys, set against a wall or exit to another level. To activate the key, you have to run over it by foot, and as it's usually set in the centre of a maze with no clear room for the mothership to land, you have to land outside the maze and find your own way in. Plus, you can only activate one red and one green key at once, so you have to play very carefully which one you select.

You are under constant bombardment by the aliens that populate the plains. Large balls roll in your direction, continually tracking you; gun emplacements pop up Xenon-like and fire at you; homing missiles come after you all the time. There's just no getting away!

The graphics are really nice. Sharp and colourful. No-one could call the game unattractive. The scrolling isn't exactly smooth, but it does have a very nice parallax effect. Well, not exactly true parallax. The backdrop is two layer, with the real layer only seen through holes in the front layer. The strange, but very pretty thing is, the rear layer scrolls slightly out of synchronisation with the front, so you get a terrific, if slightly weird, swinging effect.

Sound is quite nice, with a repeating tune all the way through. After a few hours, I can see how it might get boring, but then you can always turn it off.

There are two ways you can play Fusion. You can either play it as a straight, well balanced cross between frantic blasting and taxing problem solving, or you can take it as a straight shoot-'em-up. Either way, it's a damn good game.

There are two ways you can play Fusion. You can either play it as a straight, well balanced cross between frantic blasting and taxing problem solving, or you can take it as a straight shoot-'em-up. Either way, it's a damn good game. 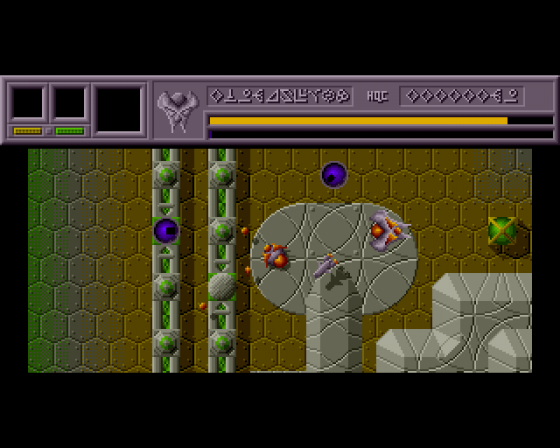 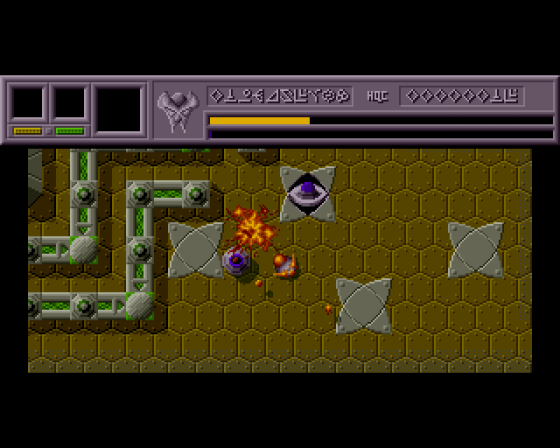