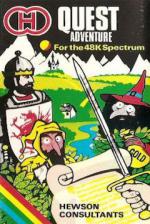 Be My Quest | Objectives | In Play | Verdict | Rating

Adventures like this hardly need any introduction, as you know what you're getting before you start: forests, castles, gold, swords, elves and dragons, wizards and rogues.

Your task is to search the landscape for an ancient scroll which contains a clue before locating a map. What happens when you find it isn't stated, but perhaps the scroll tells you.

Instructions and hints are clear on the fold-out cassette cover, including a list of about twenty main commands that the program recognises.

You first must choose an identity from the list of wizard, cleric, rogue, fighter and simpleton; the computer distributes points randomly between various features of strength, luck, dexterity, constitution and charm. If any of the first four fall below zero that's the end of you; there are the usual commands to check your status, score and inventory as you go. Get stuck and you type HINT, though the clues are frequently so cryptic as to be more of a hindrance.

This is not a text-only adventure - some locations come with graphics, but they tend towards the simple rather than The Hobbit standard, and the quality of text is uninspired.

Although the adventure began to absorb me as I wandered around mapping out the locations and encountering the dwarves and elves, not to mention the golem who has strayed in from elsewhere, some responses were odd. They seem to indicate the program hadn't fully allowed for a wide enough variety of instructions. In one place I was told "You can see: a gold piece; a short sword; a bread." While uncertain what "a bread" was, I decided to try and nibble it anyway: "Eat bread." "What bread?" came the reply. "Get gold," I tried. "That's meaningless!" I was charmingly informed. "Get gold piece" was obviously what was wanted, and only after getting that and the sword was I allowed to eat the bread! Perhaps it was an unsliced loaf.

Other features include a range of twelve possible magic spells and combat with various characters.

With The Hobbit and Valhalla setting the standard, (even though three times the normal price), average adventures like this begin to pale by comparison. It takes a Mad Martha or a Groucho to stand out from the crowd.

Be My Quest | Objectives | In Play | Verdict | Rating

With The Hobbit and Valhalla setting the standard, average adventures like this begin to pale by comparison.