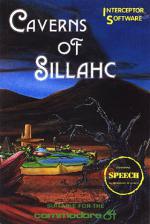 Another of those games with a pageful of waffle along the lines of "It was chronicled in the ancient books of..." and few instructions.

The game looked more promising, involving tacking a spacecraft through a network of underground caverns in order to rescue various droids. The bottom half of the screen contains information about fuel, dwindling lives, dead and live droids, while the action is confined to the top half.

The game needs a joystick, and as you take off from the planet's surface goldfish appear to be swimming about you, though I think it's safe to assume these are in fact bombs of some kind.

They're to be avoided, anyway, as are the larger spherical objects that patrol parts of the screen.

The game takes forever, and as it doesn't involve any great skill once you've blasted the goldfish out of the skies it is also exceedingly boring.

The game takes forever and, as it doesn't involve any great skill, it is also exceedingly boring.