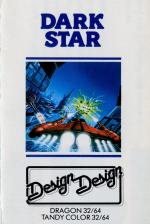 From the people who brought you Rommel's Revenge and (ahem, ahem) Tubeway Army comes quite simply the best 3D game for the Dragon since - you guessed it - Rommel's Revenge. Dark Star puts the player in the role of Luke Skywalker, Captain Starbuck, Buck Rodgers, or any other space hero from Dr. Who to Hari Seldon, flying through space, diving towards the planet to loot fuel and destroy everything else, in runs that George Lucas would be envious of!

The game places you literally in the pilot seat of a small craft. The controls are simple. By adjusting your sights you also control your roll, climbing and diving. You can fire, accelerate, and decelerate. And that is it for controls. Very simple, right? Wrong. At least not when there are what seem like 15 billion alien ships (usually there are actually two or three!) all opening fire with equal vehemence upon your timid little craft.

The game is very simple (in fact so simple that it could become boring after a while) but seems to have an extraordinary addictive quality that makes me want to keep playing for about an hour and then suddenly bores me.

There are enough options to set up a game for every day in the year, and they can certainly cater for any player's level of expertise. You can choose to use one or two joystick options or set his own keys for keyboard play.

You then choose difficulty level, type of enemy missile, and other options and launches into space.

The game operates in 3D and is graphically stunning. The graphics are simple but fiendishly effective and the speed at which they move seems to have no effect on the smoothness and clarity of screen action. The planet is depicted simply and effectively and the feeliing of diving and climbing is quite superbly gut-wrenching!

The game is a must. I have given it five stars. It probably only deserves four and a half as I'm not yet sure of its durability, but seeing as Design Design have done this on the Dragon thus continuing to support our micro with quality sofware it gets five!

A must...! The graphics are simple but fiendishly effective and the speed at which they move seems to have no effect on the smoothness and clarity of screen action.