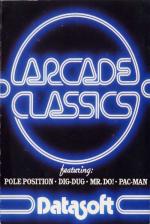 Games compendiums seem to be all the rage at the moment. Arcade Classics is a collection of four fairly ancient Atari games bundled together on a single cassette or disc - Pole Position, Pac-Man, Mr. Do! and Dig-Dug.

At least three were originally released on ROM cartridges (whatever happened to cartridges?) so this cobwebbed collection exudes a strong whiff of nostalgia. Nothing wrong with that, especially if the games are still fun to play.

Pole Position is still one of the best motor racing games around and is a must for any Atari owner. The game gives you the chance to drive a racing car at hair-raising speed around any of three different race tracks, competing against other computer-controlled cars.

To enter a race proper, you first have to complete a qualifying race within a time limit. How fast you qualify governs your position on the starting grid in the subsequent race.

Options include selecting the course and number of laps, and having a practice race without other cars getting in your way.

Beware that part of the inlay instructions which tell you how to control the car - it's wrong. For the record, the car accelerates automatically. Joystick forward switches you into high gear, backward into low while left and right move the car in that direction. To brake, press the fire button.

An exhilarating game - fast movement, good use of sound and graphics and still one of my personal favourites.

Pac-Man must surely be familiar to everyone. You control the famous yellow, jaw-snapping head and zoom around a simple maze, gobbling up dots while dodging pursuing ghosts.

Special energy dots which allow you to turn the tables on the ghosts and the inclusion of several difficulty levels add to the fun.

A simple game by current standards, yet still powerfully addictive. One of the few arcade conversions worthy of the title classic.

Mr. Do!, with a fifteen minute load time from cassette, consistently refused to boot up successfully. Let's hope that it was just my review copy at fault, otherwise there could be a lot of frustrated buyers!

From memory, the game itself could almost be described as a loose combination of Pac-Man and Boulderdash. You tunnel around a field digging for cherries, cakes, puddings, burgers and so on while avoiding giant falling apples and fending off monsters with your Powerball.

It will not have escaped your notice that, when it comes to computer game plots, reality and logic invariably take a back seat.

Dig-Dug was fairly popular in its time but this conversion of a golden oldie fails to sparkle. It is similar to, but nowhere near as good as, Mr. Do! It is graphically crude, lacks variety of challenge and, worst of all, plays slowly.

Dig-Dug compares badly with today's standard of releases. The rest hold up pretty well though.

Dig-Dug compares badly with today's standard of releases. The rest hold up pretty well though.
Logout