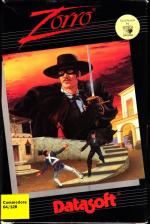 Remember sitting on the back row of Saturday morning cinema, gawping at the courageous antics of that Spaniard Superhero Zorro? Well now your youth may he recalled, with Datasoft's version of Zorro, an arcade adventure spanning 14 screens. As in any good adventure the object is to rescue a much distressed damsel held in the clutches of Colonel Garcia, the vlllian of the piece.

Whilst strolling down the street one day, Zorro witnesses the vile abduction of a fair senorita by the evil colonel.

Zorro is a game designed in a similar presentation to Datasoft's other hits Conan and Bruce Lee. Zorro himself is an action packed monochromatic sprite ready to defend the good and fight for the innocent, able to run, jump, brandish a sword and pick up objects. All the functions are accessed from the joystick, with up for jump, diagonals for jump left and right, and fire for pickup/drop. The different rooms take up the whole screen except for the top two lines which contain information on your score and how many Zorros there are in reserve.

After the abduction, being a superhero of brain as well as brawn, Zorro decides it's best not to pursue the now departed brigand and decides instead to rescue the senorita's lace handkerchief, dropped during the tussle. Knowing that Garcia is likely to take her to the local jail, Zorro starts on a quest to get the objects that he needs for the journey to the local lock up.

The main problem is to get through the catacombs beneath the Mission. Three keys are needed to get through the maze and into the jailhouse, and can be collected once some complex but logical puzzles have been completed. Conveniently, any object that requires collection to further your cause flashes on and off. To collect, Zorro's sword must be placed over the object and the fire button pushed. There are other items scattered around the screens that, though not used as keys within the maze, help you get at the keys. Collectable in the same way as the keys, when picked up they replace Zorro's sword. To use what you've picked up it's usually a case of dropping the object in the right place. One of the funniest problems to solve involves the wine bottle. Once you manage to collect it, Zorro must be guided to the cantina where a drunken Bandito is sitting. Upon giving him the bottle of wine, he promptly passes out, allowing Zorro to hop onto his belly and use it as a trampoline lo get to a previously inaccessable platform.

The game allows quite a bit of interaction between the main sprite and the background. Most of the scenery can be climbed, bounced on, or run over. In addition to prone, inebriated Banditos (or is that Baditoes?), there's a number of trampolines around the town which are great fun to jump on.

As in nearly all arcade adventures nowadays, new screens are introduced into view once Zorro legs it off the side of the screen. Soundwise there are various spot effects, plus an atmospheric latin rhythm in the background.

Another film spin-off from across the Atlantic. Zorro is a really energetic dude, he can bounce on all sorts of things, like sofas and even bull horns (painful eh)! Zorro also seems to have tremendous strength; he can carry a plant half his height single-handedly by the top leaf and still bound around with the greatest of ease. Apart from some minor hiccups Zorro seems to be a very average game, but requires a lot of thinking, a wondering how to get things going, especially the fire. After spending a few games getting used to its quirks, I soon realised that there was more behind this TV spoof than first met the eye, like getting things to weigh down lifts and other oddities. The game has some good features - like the more times you bounce up and down then the higher you get, Dynamite Dan style. Killing the baddies is too easy and makes Zorro very average for me.

Datasoft seem to be trying to write their games to formula. The way Zorro plays, the way it looks, even the way it sounds is all very similar to their previous hits Conan and Bruce Lee. Graphically, compared to recent releases for the 64 Zorro is just so crude, the sprites are lumpy and of extremely poor definition. Scenery is mostly of just four colours and soon gets dull and repetitive. There is some fun to be had, running around the course and jumping off various objects is great, but if you start to try out any of the problems you soon find that a losing battle is being fought. I'm afraid that despite the enormous potential of a Zorro game, Datasoft have really lost out. Seems the same as many other games-of-the-film conversions.

Zorro is very reminiscent of Bruce Lee in both its looks and gameplay, although this game is far harder than last year's classic. Some of the puzzles that you have to complete within it are rather obscure and take quite some time to figure out, making the game somewhat slow to play. There is some action when you have to fight with the guards and leap about the more perilous parts of the screen, but mostly the game involves collecting things and putting them elsewhere. The graphics are reasonable, but the four colours used are rather bland. The sound is awful, with a really annoying tune which grates throughout. If you like this sort of game then you could well be pleased with this, but if you like your action a little faster and hotter, then you might find yourself bored playing Zorro.

Presentation 45%
No real options to be found except for start game.

Sound 34%
The music is a real pain and will have many a gamester reaching for the volume control.

Hookability 74%
At first great fun clambering all over the landscape...

Lastability 68%
... but the problems are just too obscure to make any real headway.

Value For Money 72%
Usual US Gold price for a very run of the mill piece of software.

Overall 78%
Though some enjoyment may be gleaned from Zorro by avid platformists, most people will probably tire quite quickly of this cliched release.

Though some enjoyment may be gleaned from Zorro by avid platformists, most people will probably tire quite quickly of this clichéd release.