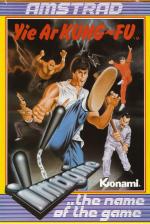 Yie aaarrrgh! Not another kung fu game I hear you cry - but wait until you've heard what's special about this one. Eight different opponents with changing styles and weapons, two graphic backgrounds and music are all included in a package that sets out to be more entertaining than Fist but just as tough.

It takes place against either a mountainous or template backdrop with the opponents battling to knock each other out in the same 2D format as Fist. You control Oolong who has a range of ten moves at his disposal to fight eight devilish opponents.

Opponent number one is Bucha, a big, bald bruiser of a fellow, who flies on screen headfirst as if he's been shot out of a cannon and thereafter tries to batter you to the ground. The fighters have energy gauges and every time one of them lands a hit, marked by a small explosion, the opponent's gauge decreases by one section. When the gauge reaches zero, the fighter will keel over leaving them with their little legs waving helplessly in the air. That means they've had it.

Music accompanies the action if you want it to and as the blows strike a satisfying crunching sound effect cracks out. As the fights progress, points are scored for each hit that Oolong makes. He also gets a bonus for the amount of energy he has left if he defeats his opponent. Most of the fight action is very attractive, although there isn't a great deal of true animation, with the best part being the extraordinary leaps in the air that Oolong can perform to give his enemies the run around.

The second opponent is called Star and you'll quickly discover his dirty trick of throwing stars at you. These have to be jumped over or ducked under to avoid a hit. But once you're in close, Star will be unable to throw his deadly projectiles. Even then the problems aren't over since he still fights hard and tries to get to a position where he can throw the stars again.

Nuncha is the third fighter. He wields two clubs joined by a chain. He whirls these around his head and is able to strike you from some distance with the extended reach of the clubs. Like Star he's more vulnerable if you can get in close but he will cause a lot of problems. All the fighters are dangerous if they manage to get a string of blows going since it is tough to interrupt but it can work in your favour if you can trap them at the side of the screen and hammer in your own series of blows.

The fourth opponent is Pole, who again can strike you from a distance with his stick and is another fat fellow like Bucha. Pinning him down is quite difficult as he waves his stick all over the place. Club is opponent number five and lumbers around carrying a club and shield, looking something like a roman gladiator. All this weighty gear and his porky body mean you can defeat him with your speed and quick reactions.

Not so the next opponent, Sword, who nips about screen dealing flashing strokes with his vicious broad-bladed sword. It can get quite frustrating as he hacks away at you and Oolong fails to respond but it's satisfying when his skinny little body finally hits the floor. Tonfun is number seven on the menu and carries a nasty pair of wooden sticks. Speed is again the key and you need to bewitch your opponent with flashing hands and feet.

The last opponent is Blues. He brings no nasty weapons to threaten you but is made from exactly the same mould as Oolong but in a different colour. He has exactly the same capabilities as you and will leap all over the place and trade the full range of blows in a very fast and evenly-matched battle. Success against all eight opponents takes you back to Bucha, but this time all the fighters are even more fearsome.

At first sight this seemed to be a comedy game - the first opponent, Bucha, arrives on the scene like a trained seal diving for a beach-ball at the circus. But Bucha's pretty bunch, even if he does seem to have a slight weight problem, and it's rapidly made clear that this is going to be a tough old scrap.

What makes the game so entertaining, despite the recent rash of bash-'em-ups, is the variety of foes. Each of the eight has his own peculiar rites and weapons, making your progress - if you make any - extremely problematic. Graphics and sound are excellent, but it's a shame you can't take on another player in this very classy punch-up.

One thing puzzles me though. Why is our hero named after a kind of tea? Can you imagine a karate champ called Darjeeling or PG Tips? I think Imagine owe us an explanation.

Graphics and sound are excellent, but it's a shame you can't take on another player in this very classy punch-up.