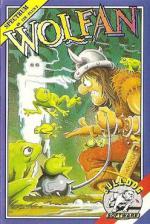 Dark thoughts, deeds and demons lurk deep in a sinister kingdom. Wolfan the barbarian enters this demonic paradise to clear up the clutter and confront that contradictory and nameless being the Nasty One.

Wolfan sets off on his murky quest through a flick-screen world of garden pathways, arboreal arcades and stone halls. He encounters monsters - some we intelligent, some have one brain cell searching for a friend, some are nomadic following Wolfan between screens, and some remain confined to a single screen.

These critters attack Wolfan, sometimes unprovoked, and he also risks falling down mineshafts.

But the monsters can topple forward into these Coal Board relics, too, taking to oblivion any useful items they hold.

Wolfan can kill these aggressive creatures with well-aimed bombs or by transforming them into fat frogs. He then acquires anything they're carrying - but when the monsters carry objects to other screens, Wolfan can't get them back. Other items such as bones, moneybags and skulls can be gathered from the pathways and halls, to earn points.

For further aid, Wolfan can command monsters to speak, or ride on their beastly backs, though a fall from their bony shoulders puts our hero in intensive care. He can pick up extra knowledge by nuzzling the snout of a pig-headed Soothsayer, provided the Soothsayer has the globe of vision.

After chomping on a magic frog, Wolfan can barehandedly slaughter wizards.

And some mercenary monsters may accept bribes to join Wolfan's army; others are eager volunteers.

'We can do without a Greyfell clone this bad. The graphics are reasonable as forced 3-D goes, despite the unattractive characters, and the scrolling message is a nice (if unoriginal) touch. But there's not much playability, and Wolfan is essentially boring.'

'Look out, world - it's another 3-D game with the same graphics and monochromatic colour scheme as all the others. Wolfan's only appeal lies in a cute touch: you can talk to any object around you, though the answer is usually 'Hello Wolfan... I'm a tree!'. Woltan will only appeal to people who don't have many 3-D games.'

'Whatever will they think of next? Another monochrome arcade adventure, no doubt. There's nothing new or exciting about Wolfan, it s simply lots of old ideas bundled into a boring and unplayable package. The graphics are typical of the Bulldog range, as is the awkward 3-D presentation. Wolfan is very much one of the monochrome pack.'

There's nothing new or exciting about Wolfan, it's simply lots of old ideas bundled into a boring and unplayable package.