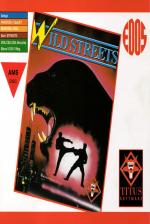 Do you get a kick out of your job? James Taylor does. In fact he gets kicks, punches, head-butts and even knees to the groin, all as part of his daily routine. He's an enforcer for the CIA, a super spook who takes on missions too dangerous for even the most elite army units. It's his task to clean up New York, where once-peaceful suburban boulevards have become "Wild Streets".

The year is 1998. Organised crime barons had a stranglehold on the metropolis until two weeks ago. Then, a massive security operation was launched in one last, desperate bid to save the city. The drug lords' response was swift and decisive. They kidnapped CIA top dog John Stevens and will kill him if the cops don't ship out immediately. Your job, as James Taylor - hitman and kick-boxer extraordinaire - is to set him free.

The concept's pretty straightforward. You walk your mam man horizontally along scrolling streets, beating thugs out of your way for five levels, in order to save your boss. Then you guide your lord and master back through the same five levels to a waiting helicopter and safety.

On the way, you get the assistance of a large black panther who leaps into the fray at a moment's notice, and an even larger pistol that can be used to top any particularly sticky opponents.

Fighting needs fast reactions and a whole gamut of moves to allow you to out-react and out-manoeuvre opponents. James Taylor has lightning-fast hand speed and fifteen different actions - a true terminator. The other guys have a similar range, but rarely stray away from predictable patterns, making them easy meat for the quick thinker.

If the going gets too heavy and your ener-gy bar dips to dangerous levels, m pops your puss cat and tears a few of them to shreds. If you're far enough away you can blast them with the gun, too, but with only a limited number of shots and few chances of a reload, discretion is definitely the better part of valour.

Once you manage to get to the end of the fifth level, your panther pal does a runner and you pick up the zombiefied CIA boss (no, not George Bush!) who follows you slowly back. Objective One is staying alive and keeping on the move. Stand around revelling in the fist fights, and the bad guys begin to kick the living daylights out Mr Stevens, your boss. If he dies then it's game set and match to the Sicily squad. James Taylor can beat his boss about too, but that smacks of stupidity even if it is satisfying.

As an action adventure, Wild Streets relies on its graphics and animation and in that respect is above reproach. Flashing fists and feet are the result, with James Taylor's moves clear even in the heaviest traffic. The incidental graphics, too, as we've come to expect from Titus, are viciously pretty with two stunning overscan screens thrown in for good measure.

The action's helped along by great music that plays constantly, its regular tempo providing a counterpoint for the peaks and troughs of the war that's begin waged on-screen. All these efforts are recorded for posterity on a permanent high score table, a feature that would go down well on most games.

Unfortunately, the big failing of the game is the way it plays. On the earlier levels it's possible to avoid all contact, apart from the end-of-level master, just by frog-hopping past everyone. The Mafia are apparently unable to attack anyone who moves in mysterious ways. And on the later stages, where it's really necessary to use the gun. the real difficulty ain't in staying alive - just keep on jumping - but getting far enough away from somebody to shoot them. It may be realistic, even New York thugs not relishing the idea of being shot, but it makes for some wildly irritating minutes of leaping and blasting.

Wild Streets is a beautifully executed game that comes close to simulating the speed and accuracy needed for serious street-fighting - but it's unbalanced. James Taylor is too powerful to begin with, while the lack of variety on the villain front means that they just become agonizingly difficult to catch rather than kill.

After a few quick and very violent games you'll realise there are two ways to play; either cheat and go for victory or stand and fight. If you decide that winning is the only thing that matters, then it's far too easy to complete. It's streets ahead of games like Ninja Warriors (with which it shares a great many gameplay features) but isn't nearly wild enough.

Looks great - the graphics are almost 16-bit quality! - but as far as I can see it's just another scrolling kick-'em-up.

Mean and clean in green.

Overall 71%
Strong fight sim but lacks that extra something.