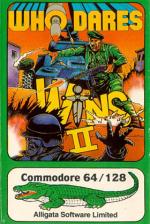 Fancy being a sole commando armed with only a machine gun and a few grenades, with the task of capturing eight enemy outposts against massive opposition? Well, with the latest release from Alligata you can. Who Dares Wins II puts you in that exact situation where, with adrenalin flowing, you are put in a position where kill or be killed is the only option.

The action takes place on a vertically scrolling, detailed landscape and you have to fight every inch of the way to capture the eight enemy outposts. When you start the game you are really put in at the deep end. Shattered buildings lie each side of you and the only choice is to go forward across the bare and blasted landscape.

As you can expect, the landscape is absolutely infested with the enemy - these blue and brown uniformed soldiers emerge from the side, jumping off buildings or come running from behind trees and instantly start attacking you. Luckily, their country isn't too hot on the technological scene and they're only armed with single shot rifles. Your brilliant sub machine gun is capable of pounding out around three rounds a second, making life a little easier. Even so, the sheer number of the enemy is sometimes overwhelming.

Across the landscape are scattered many hazards and traps. Quicksand awaits an unwary commando who hasn't got his eyes peeled, and pools of water with crumbling banks claim anyone who strays too near their edge.

Other hazards include soldiers with deadly accurate mortars, although they can be disposed of by lobbing one of your limited grenades at them. You start the game with six grenades and more are parachuted in to help you on your way. When they land, simply run over the box and another three grenades are added to your total.

Occasionally you come across enemy vehicles, either manually driven or robot controlled. These always move across the screen, although the robot controlled tanks move left and right in an attempt to gain a line with you so they can fire one of their missiles accurately. There are also railway lines which have to be crossed. These are pretty hazardous since little railway carriages trundle along the lines every so often. All these vehicles can be disposed of with a well-aimed grenade and give a nice points' bonus if successfully destroyed.

Occasionally you come across one of your allies. The only trouble is that he's in rather dire straights since he's tied to a post and about to get shot by a soldier. Shooting his would-be executioner gains a points' bonus for saving your fellow soldier.

As you approach the outpost there are rivers with tiny bridges which are the only way across. You have to shoot the soldiers on the far side if you are to get across safely, since a single accurate shot from them as you cross spells certain doom. Sometimes soldiers in boats patrol these waters, although they don't pose any threat to your soldier.

When the outpost is finally reached, many soldiers pour from it and a pitched battle with you in the middle ensues. It's then up to your skill and reflexes to survive. If you manage to capture the outpost, then you automatically go forward to tackle the next, and far more treacherous mission.

On later levels, soldiers in potholes and a far more hazardous landscape try to lessen your already slim chances of survival.

You start the game with three lives, although extra ones can be earned at regular point intervals.

This game is like nothing I've ever seen in the arcades or anywhere else, for that matter. It's great! I must admit, I'm pleased to see such a game available for the 64. And to see one so playable and well programmed is marvellous as well. It's important to note however, that this game does suffer from a few aesthetic problems, if nothing else. First, the forced perspective is really forced! You can get away with this kind of thing on arcade games because of their massive screens, whereas here, I cringed at some of the effects on screen. Also, some of the bullets seem to change course slightly, from time to time. When you think you're dead on target it can come as something as a shock to find your enemy still coming for you, just after shooting at him half a dozen times. Moans and groans aside, Who Dares Wins II is not half bad (as we Northerners are supposed to say). Get yer paws on this one and you should find yourself wrapped up in an addictive game.

Jokily credited as programmed by Tommy Atkins, Alligata has come up with a real classic. Despite the shady ethics and gory scenario, the game is just so much fun to play. The backdrops, though having a slightly garish colour choice, are of a very high quality indeed, with the soldier able to move in and out of the buildings convincingly. Though having an initial resemblance to Frontline, you soon realise there's a lot more in it, the game design obviously having had a considerable amount of time spent on it. All in all, the best game of it's type to date and anyone else who's thinking of attempting anything similar will have to go a long way to beat it.

This is a highly original arcade-style shoot em up which in some respects looks similar to the first screen of an old arcade classic, Frontline. Blasting enemy is the name of the game, and it's all done in really gory style - fantastic! The landscapes are incredible - tons of ruins, railway lines and other hazards await an unsuspecting player ... it's just like real life where you just don't know what to expect next. This is one of the top arcade programs of the year - miss it at your peril!

Graphics 91% Excellent and varied backdrops with heaps of sprites.

Hookability 93% Desire to capture the next post is huge ...

Lastability 90% And it's not easy by any means.

Value For Money 92% Well cheap for a well crucial game.

Overall 90% One of the best arcade shoot-'em-downs yet.

One of the best arcade shoot-'em-downs yet. Excellent and varied backdrops with heaps of sprites.