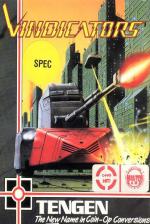 AAAIIIEEE! Leap into your 26th century star battle tank, race through the terrifying battle-stations of the Tangent Empire and blast your way through endless hordes of fanatical enemy tanks blasting a swathe of death and destruction!

Sounds exciting, doesn't it? Well, that's just the trouble - it isn't. It's all rather slow and stately.

Vindicators is the first Spectrum game to appear on Domark's Tengen label, which is dedicated to converting Atari coin-op titles. It could have been a great start - maybe on other machines it is - but it just doesn't make it on the Spectrum.

Most of the features of the original coin-op are, of course, there. One or two players steer their futuristic battle tanks across a vertically-scrolling landscape of parallax lines. The aim is to get to the end of the level before the timer runs out. You have to pick up fuel stars to keep going, and collect weapon bonuses to upgrade your tank with extra shields, increased firing range, smart bombs and so on, in the inter-level swap shop. The mono backgrounds aren't particularly inspiring, even on the later levels when they feature rotating gun towers, electrical poles and starry chasms around which you have to steer.

Slightly better are the enemy tanks, which come in more assortments than there are Smarties in a tube. Some of them you can outrun, others you just have to gun down, as they follow you around firing at you. If you find the key to the next level, which is usually hidden somewhere near the door, you progress to the armament stage then the next of the fourteen levels.

So the basic plot is fine and some of the graphics are OK. Unfortunately the gameplay lets things down. It's just too slow - rather than zooming around dealing death and destruction, as you do on the coin-op, it's more a case of trudging around making a bit of a fuss. The explosions aren't impressive, the sound effects are merely adequate (which is a pity considering the amazing sound of the coin-op, though it's inevitable I suppose) and if the scrolling was peanut butter it would be crunchy rather than smooth.

Not a bad attempt, then, but a pity that such a promising format should turn into an unremarkable game.

Average tank fighting game based on the Atari coin-op.

Not a bad attempt but a pity that such a promising format should turn into an unremarkable game.