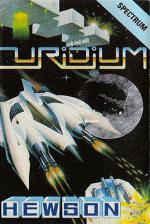 Suddenly scrolling shoot 'em ups are back in style, so we shot off to our very own stylish lovebirds and asked Gwyn Hughes and Rachael Smith whether they've got the scrolls, or if they always walk like that?

From the depths of space they come... and they want our minerals. With a cry of 'Land - mine!' they prepare to plumb the planetary depths in search of metals, precious and otherwise. They are... the interplanetary scrap merchants!!!

They put their rag and bone carts into orbit round each of the planets of our solar system. But these aren't flea-bitten horses dragging Steptoe wagons. These aren't even interstellar skips These are sooper-dooper Dreadnoughts. And they're bi-i-i-g!!!

This is obviously the sort of situation that calls for a hero. And you are the sort of person who volunteers to fly a low level mission in a teensy weensy Manta fighter, against a huge, heavily defended hulk... aren't you? Stop trying to hide behind that potted palm - I can see you!

Or to put it another way - Uridium, the Commodore (boo) smash hit, has found its way onto the Spectrum, and its difficult to imagine a faster blast everything up. It's one of those rare, perfectly balanced games. One that'll keep you up into the early hours unable to pull the plug because next time you might just make the next level.

So what makes Uridium the megagame, it undoubtedly is? Could it be the turn-on-two-and-a-half-new-pence handling of your Manta, as it twists, turns and spins through space? Perhaps! Not only is the manoeuvrability of the little ship a joy to behold, it soon becomes second nature as you wrench the joystick round for another 180 degree turn. You're really in touch with the on-screen action.

Then there's the strategy element. Of course you can plough on in, taking pot shots at anything and everything, but if you do you'll soon be just another entry in an alien junk man's inventory. This calls for a little subtlety, see.

For one thing you need to know your way round the behemoths, because their surfaces are covered in aerials, fortifications and even the odd outside loo (for your convenience). If you don't want to wrap yourself round one of these obstacles you'll need a fairly close knowledge of th best path particularly since you'll be flying fast!

Second trick is to learn what class of fighter's going to make your life a misery next. Some are fairly easy, flying a nice neat pattern, but others cause more of a problem. You'll have to decide whether there's a chink in their strategy or just to avoid them.

Eventually you'll beat a behemoth and see that welcoming message flashing at the top of the screen, telling you it's time to land. But not to relax. Never relax! Within seconds you'll be spacebound again, battling against a new foe, with a whole new flight path to learn.

The most obvious omission, compared to the Commie original, is the colour. Hewson has sensibly opted for monochrome backgrounds, though the stars still sparkle most colourfully. This sometimes causes problems if you're trying to spot small bombs against a textured surface. But the horizontal scrolling, never easy on the Speccy, is superfast and smooth.

Uridrum has to be the ultimate shooting match. So remember - in space nobody can hear you scream... but your folks will tell you to shut up every time your ship gets shot to smithereens!

The ultimate shooting match. Even the horizontal scrolling, never easy on the Speccy, is superfast and smooth.