1st February 1990
Tintin On The Moon
By Infogrames
•
Spectrum 48K 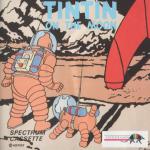 Straight from the long-running comic strip books comes the first rocket launched to the moon. On board are TinTin, Snowy the wonder dog, Captain Haddock and Professor Calculus (not calculating evil Colonel Boris). The story has been turned into a two level computer game: it starts with the moon rocket flying through a meteor storm which contains two types of tumbling spheres. Hitting yellows increases TinTin's energy level (zero energy means end of game), while the red globes warm and warp you to the second part of the game (eight need to be grabbed).

The second part of the game shows TinTin running around inside the rocket trying to complete several tasks: defuse the bombs set by the evil Colonel Boris, extinguish the fires that inexplicably spring up, untie your friends who have been attacked by the nasty Colonel and finally give him his just desserts by capturing him. Fire extinguishers are used to put out the fires as well as stun Boris, but don't let too many fires spring up because they drain your energy.

If you're successful (and don't run out of energy) you are returned to the meteor storm to collect more globes, and so on until you reach the moon.

TinTin is one of my favourite comic characters, and for many years - oldie that I am (and old he sometimes seems - Ed.), I have followed his exploits both in books and on TV. Whilst TinTin On The Moon captures the spirit of the comic book, the game is sadly too easy to complete (it didn't take Nicko very long, git), and there isn't enough action for your money. The two levels are fairly challenging for a while, but sadly tedium soon sets in.

Sorry Infogrames, TinTin On The Moon entertains for a while but it soon dies the death. I didn't know a review of a trip to the moon could be this short...

'I thought TinTin on the Moon had great potential when I first saw it. All the presentation is brilliant, with an animated title sequence and loads of colour. There are two main sections in the game. The first has TinTin in a space ship zooming through space in 3-D. On this section all you have to do is dodge the asteroids and pick up energy pods to use on the next section. The second is a type of platforms and ladders game where large animated sprites of TinTin and all his mates (including Snowy) run around trying to stay out of the way of the evil bloke. On this stage you must find an extinguisher and put out all the fires then collect bombs. That's all there really is to the game: each level gets a little bit harder, but if you collect enough energy (there's an endless supply) you can complete the game, no hassle. It only took me about ten minutes! TinTin on the Moon would have been an excellent game if it had been endowed with a bit more challenging game play, - if you don't believe me, try it yourself.'

This would have been an excellent game if it had been endowed with a bit more challenging gameplay, - if you don't believe me, try it yourself!