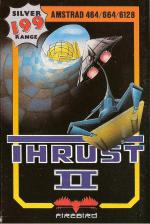 Another budget game to relieve the needs of us poor thankful action addicts. Well, perhaps "action" is the wrong word to use for this game. Anyway, it's cheap.

The sequel to Thrust is a continuation in the seemingly endless struggle against the Galactic Empire. You play the part of a member of the resistance, which has taken over an artificially created planet. Your job is to guide your ship around this small planet in search of the orbs which will, when placed in the correct position on the surface, build the atmospheric processor. It will purify the cloud of red dust surrounding the planet and allow life to exist there.

But you have a limited time after removing orbs from their holders to place them on the surface, otherwise they explode. Your task is made harder by imperial android guards, still left on the planet from the invasion. However, to combat them, there are chemical agents hidden inside boxes dotted around the complex maze of passages that make up the inside of the planet. Once collected, they last for a short time, and only one can be used at a time.

I don't like this game at all, but I can see how it might appeal to others. I find the overall task a bit limiting, and uninteresting. The control of the ship is good fun, especially when carrying an orb. The weight of the orb tends to drag your ship down with it, but I enjoyed mastering this mode of travel. The characters are all single-coloured, and the scenery is rather drab and lifeless. Sound is not worth mentioning. If I play a game and cannot remember the sound when I come to write the review, I feel that is apt proof that the sound was pretty mediocre anyway.

For the price, this game is worth getting, if you liked Thrust.

The graphics are an improvement on the original, but the gameplay isn't. The beauty of it was the simplicity of just flying and shooting in confined spaces. Now you have to fiddle around with chemical agents. I much prefer the original but, to be fair, they've made a gallant attempt to improve upon it. If you liked the original, you may well like this sequel.

All pods, aliens and features visible.

Pick up one orb and place it on the surface.

Graphics 67%
P. Clearly defined.
N. Everything is single-colour, and jerky at high speeds.

Grab Factor 63%
P. Enjoyable controls to master.
N. A sequel with little variation from the first.

Overall 64%
A fair sequel to Thrust.

A gallant attempt to improve upon the original.