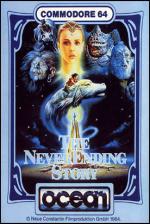 This 100K blockbuster is based on the film of the same name and loads in three parts from cassette. It's an excellent example of the new breed of graphic adventures, where someone's really taken care over the design of the pictures so that they properly complement the game and aren't just there for decoration.

The plot, just in case you're among the millions who missed this cinematic epic, concerns a planet called Fantasia which is under 'attack' from an all-consuming "Nothing". Just what this Nothing is, isn't very clear, although it's obviously something to be reckoned with. The hero of the game is a boy called Atreyu, who alone can find the saviour so desperately needed. Although I didn't manage to complete the game before sitting down to review this masterpiece, I am willing to hazard a guess that the saviour in question is none other than yours truly, but only time and playing the game will tell!

The screen display is really quite impressive. At the top you have a narrow graphics window with an attractive landscape background that is periodically overlaid with small cameo portraits of objects you are carrying, people you meet or locations you visit. The pictures are very pleasant, and when combined with a well-designed character-set, give the program's display a very professional appearance. If only other companies spent as much time over the appearance of their games - many a good program has been seriously marred by poor screen design. There is a price to pay for all this glitter, however, and that's a poor parser.

The program only understands about 40 words, and of these most are direction commands and the usual GET/DROP/LOOK variants. One important omission is of an "Examine" command - particularly sorely missed since on many occasions you will be confronted with an object, or even an individual, about whom you know very little. The cassette cover blurb says, for example, of your potential companions that you will have to judge for yourself whether or not they will help or hinder you in your quest - but this isn't easy when you can't look at them!

Is Anax, for example, a horse, a bird, or another human being? Such questions have to be answered by referring to the program notes - a practice that I frown on since program notes have a habit of disappearing with the passage of time.

Time appears to play a part in the game - if you sit back and do nothing, the program prompts with "You wait..." Hobbit-style, but the other characters don't seem to take advantage of this and remain static, which is a pity. In fact the characters, although obviously significant, don't seem very interactive - which is just as well because there isn't enough of a vocab to communicate with them anyway.

Whatever the shortcomings of the parser, however, I reckon this is a very attractive program. There's a considerable atmosphere to the game, which is supported (and not detracted from) by the graphics. I think the game would be particularly welcomed by younger players, but don't let that put you off if you're of more advanced years and have a chance of loading it up.

A very attractive program... There's a considerable atmosphere to the game, which is supported (and not detracted from) by the graphics.