﻿ The In Crowd (Ocean) Review | Your Sinclair - Everygamegoing 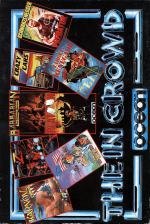 The In Crowd is an impressive looking box with a clever name, one you might ostentatiously leave lying on the coffee table when your friends are around. And its contents are no less impressive. Six cassettes, containing eight famous hits and five megagames. But all seem to involve murder and genocide on a grand scale, so is there enough variety and architecture in there to attract your average gameplayer?

This game puts you in charge of Karnov, bulky Bolshevik hero, on a quest to recover the fabled treasure of Babylon from the evil dragon Ryu.

Unfortunately monster-infested countryside stands in our hero's way. Inhabited by ghosts, demons, ostriches, golems, dinosaurs and everything remotely ugly and carnivorous. But, luckily, burly Karnov has a fascinating genetic defect: he can breathe fire. And, luckier still, there are bonus icons hanging about, giving our Russkie extra-speed, extra-firepower, ladders, wings, bombs, you name it, he's got it.

The graphics in Karnov are excellent - huge, bold and uniquely colourful. Each scrolling level palpitates with colour. And a wealth of scenery awaits a budding adventurer: jungles, caverns, pyramids, castles, and wastelands. A special strategy is needed for this game Shoot, sweat - and gallons of each.

A great throbbing alien heart is pulsating in the depths of another world and you're deployed to trek across scrolling jungles and through intricate mazes to cause a little strategic coronary in the heart department. Of course, no alien planet would be an alien planet without aliens - and this planet more so. Thousands of the green things attack you from all sides as you rush to collect bigger and better weaponry.

This excellent shoot-'em-up is not just another one of those twenty-levelled assaults on alien kind. It's singled out by the smooth scrolling, the unrelenting action and the sheer diversity of levels. Some sections scroll horizontally, some vertically and some in three dimensions. Seeing is believing Gryzor is fast, fancy and fun to play.

This game shoves you unceremoniously into the jack boots of a new recruit, facing a series of tortuous tests of mind, body and joystick. The tests include the assault course, the shooting range, and the customary scrap with the large-jowled instructor.

Combat School is a great game with excellent fluid graphics and a wide range of events to suckle your attention, but it is very difficult and the fact you have to reload each event when you die doesn't help. The competitive element is there but it doesn't shine through.

This game is a multi-sectioned shoot-'em-up lost in a jungle setting, with a vain attempt at capturing the atmosphere and motives of the movie. You direct your lone infantryman through a maze of forestry and underground tunnels. Survive by shooting and lobbing grenades and collecting specific objects to carry out your mission. The graphics adequate but again this game is too difficult and discouraging to a novice gameplayer.

This is probably the weakest of this prize bunch. It's a bland, view-from-behind racing game, where you and the computer-controlled opponents bullet along an endless meandering road. The graphics are weak and badly animated. The road just goes on for ever and ever and ever...

Based on the gut-busting thriller of the same name, Predator places you in the middle of a moist jungle. Your mercenary pals have been skinned alive and hung up to dry, the trees are swarming with Sandinista rebels, and to cap it all a gigantic game-hunting alien's on the prowl. You sprint across the screen, shooting at the rebels who converge on you.

Occasionally, the alien gets a bead on you and you have to avoid its gun sight as well. The graphics are great and the scrolling smooth, but there's very little to the game and it's nigh on impossible to actually achieve anything.

You're a hell-bent martial-arts man out to exact vegeance on modest gangster, Mr Big, for abducting your girl friend right at the height of your romance. Through car-parks, sordid streets and dirty parks, our man must wade into swarms of punks, prostitutes, Hells Angels and football supporters, dealing death, kicks and knees to the groins of his enemies.

Target: Renegade is still a brilliant game today, chopping Double Dragon thoroughly in the windpipe. Impeccable animation, demanding gameplay and sheer satisfaction - they're all here. But the game really shines when you use the plural player option and join a friend in carving up the opposition

You are a muscle-bound warrior, condemned to engage forever in hand-to-sword combat in an arena. Using a combination of slicing sword techniques, you must hack and chop your way through a series of monsters and guardians.

With top-notch animation and very realistic figure graphics, and the challenge of progressively tougher opponents. Barbarian is a welcome adaption of the martial-arts game and a brilliant combat experience to boot.

An excellent selection of shoot and beat-'em-ups, with a lot of appeal to the combat connoisseur. Let down only a poor driving game. But at this price you can afford to ignore it.

An excellent selection of shoot and beat-'em-ups, with a lot of appeal to the combat connoisseur. Let down only a poor driving game.