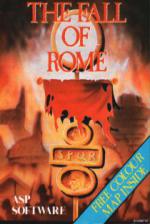 Can you imagine yourself as the saviour of the ancient Roman empire, circa 395 AD?

In this game of strategy and tactics you get ample opportunity to steer the ancient Romans to victory - or defeat. By ample opportunity I mean that the game takes place over 60 years, sectioned into five-year periods of three phases.

One phases gives you a chance to deploy your forces throughout the provinces, and during this phase a map of ancient Europe is frequently displayed and constantly updated.

Your forces consist of mobile and static legions, cavalry and auxilium, which cost money to raise and maintain. Another phase is concerned with the movement of your wealth and the third phase is the combat. The inlay card contains a wealth of information, and you just follow the prompts on the screen.

I am not a fan of strategy games, but I must admit that this game made a refreshing change from shooting aliens.

I am not a fan of strategy games, but I must admit that this game made a refreshing change from shooting aliens.