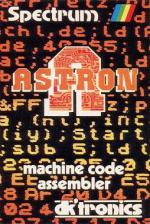 Described as an assembler and toolkit, this utility program came complete with a four page booklet. Though the first few lines told me that the assembler could be used both by a beginner (in what?) and the experienced programmer, I have a feeling that the beginner would soon become confused.

It isn't until you get to the last page that you find out that the REM statements that you need for your source code are generated by the toolkit - and even then you are not warned to start the REMs at line 100!

There is an example program given earlier which does start at line 100, but as it's only an example, the beginner may not realise its significance. Again, the example program gives an address for PRINT, and states that this is an established routine, but not at the address given, at least not in my copy!

I put in a very simple program, and found it very tedious because you have to keep moving from CAPS to lower case, and keep STOPping to get into the next phase of the program, although it did get assembled eventually.

Very tedious... you have to keep moving from CAPS to lower case, and keep STOPping to get into the next phase of the program.