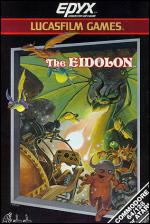 From the comfort of your armchair, Lucasfilm ask you to enter a world of dark mystery, a land that subconsciously is well known to you. From within the safe confines of your Eiderdown you are to enter The Eidolon and through it the depths of your mind, travel within your very id, a place full of surprises that deep down you already know.

Around a hundred years ago, a Dr Josef Agon distinguished himself in the eyes of the Victorian intelligentsia as one of the world's greatest scientists. Agon probed into the untapped powers of the human mind, and eventually sank to reclusedom, never venturing from his Victorian mansion, performing strange experiments and practically living in his cellar laboratory. The years of research finally paid off and the culmination of Agon's life's work was The Eidolon - a craft powered upon mind energy and capable of propelling its user into the cavernous spaces within their own identity. A hundred years on and Agon's creation is discovered, American software house Lucasfilm have managed to recreate the antiquated mind-probe in a slightly more accessible silicon form. All you need is a Commodore 64, a cassette or disk drive, and willingness to experiment within your own personna.

In its original form, The Eidolon is a spherical shaped man-sized globe, just large enough for one voyager. Mounted upon the globe's apex is a multi purpose cannon/capturer for firing and retrieving the energy-composed globes populating your id. Sitting upon three stalk-like antennas, The Eidolon floats when in action, gliding upon the mind's limitless energy waves. To begin, just sit in the control chair and pull the trigger at the side of the main operating lever and relax. The machine will then transport the viewer to a subterranean maze-like system of caverns. Using a joystick, The Eidolon can be moved through the grey cave system. When using Lucasfilm's computer circuit-based personna prober, the bottom half of the TV is dedicated to conveying the information displayed upon the control panel. Above this is a three-dimensional representation of what can be seen from the cockpit. Cave walls and vaulted ceilings move realistically around as the joystick is manipulated. On your first venture, The Eidolon is placed within the first level; the object is to progress through to the seventh level of identity. Each cave has an entrance into a deeper level of the mind, but is fervently defended by one of the caverns' guardians. Bathed in a key operated force field, you have to capture the key to the field and then destroy the gate's warder. As The Eidolon nears a force field, the space around it glows with a coloured aura. To pierce the barrier, a power jewel of a similar glow to the field's aura must be collected and projected at it.

When the caverns are first entered, a full complement of power is supplied and indicated upon the lower screen. If anything of a detrimental nature happens to The Eidolon, the needle on the power-meter fluctuates away from the plus sign and towards the minus. Hanging before you in mid-space on the first level are a number of conveniently placed yellow energy spheres that hum and glow; these can be collected to replenish a flagging power supply. If the sphere is in central view, then a diamond-shaped field suspends itself around the globe; this means that The Eidolon can capture the sphere with the collector/discharger on its roof. A pound on the space bar activates collection mode and boosts the energy needle accordingly. Extra ammunition is also awarded. Not only gold fireballs hang near the cave's roof; there are also blue spheres which not only boost The Eidolon's energy level but also alter the course of time, freezing all objects in motion for a brief spell. Since a time limit is imposed on your journey to the next level, the blue globes can be handy for time extensions or temporarily halting a nasty in pursuit.

Many creatures inhabit the twisted mind tunnels, and each of them guards a power crystal of its own. Since you need the power crystals to destroy the guardians' force fields, you have to find and destroy these monsters. Most of the creatures are quite lethargic, sitting statuesquely frozen in front of their power gem. But should The Eidolon approach an id monster, the energy radiated by the machine stirs them to life, draining all they can from your supply; proximity can be very damaging. If the supply reaches zero, then you get thrown out of your mind and back into the real world. When approached, a nasty changes from a stone-like grey into its original colour and the creature attacks. To vanquish your opponent it's best to let off a volley of red spheres by pounding on the fire button. One of four powerspheres may be selected for firing from by pressing the keys 1 to 4. Red, Gold, Green and Blue spheres are numbered one to four respectively. Each release of a fireball drains your energy supply and diminishes ammunition. Care must be taken to avoid using more red fireballs than are required to defeat the foe, for they are only detonated on contact with the monster. Too many in the system and you could run into one that has just rebounded from a far wall! In this situation you can either dodge or try and shoot it with another red fireball. If you hit true then the two fireballs merge into one. Though still bouncing and rebounding off the walls, the newly merged fireball is yellow and can be picked up if you're fast enough.

Each fireball has a different effect on the creature before the machine. Red is normally best because of its powerful nature; on the first level there's nothing that a blast of red fireballs can't trash. However, when you reach the later screens some of the creatures are just too powerful to be destroyed easily. For this the green and blue fireballs come into their own. Blue freeze an enemy for a short amount of time, giving extra time to destroy your foe. Green transforms your opponent into another monster of the caves, though it is possible to conjure up a foe of greater power. Gold balls seem to have no real effect upon any of the caves denizens.

On later levels other creatures appear, all fully animated when stirred into action. So far encountered are Trolls, Biter Birds, Rotoflies, Puffer Birds, Greps, Bottlenecks and Hellhounds. There are seven layers to be travelled through and, though no one knows what lies beyond the seventh barrier, Dr Agon's diary contained the following passage:

'Last night, I had a strange vision - half dream, half fantasy. I imagined I had made it through the seventh level, past the final guardians. Suddenly, against an immense and limitless sky, I beheld a many-headed dragon more fearful than anything I have encountered. With the light of morning, the vision lingers, too vivid and haunting to be dismissed.'

Though this was only a dream, it is likely that Dr Argon's repeated ventures into his own mind endowed him with the skill of premonition. Though as yet unconfirmed, the lowest levels of human consciousness are probably an awesome domain indeed.

The Eidolon is yet another superb game from Lucasfilm which follows the footsteps of Ballblazer and Koronis Rift. Again fractal mathematics have been used to produce some really superb graphics, resulting in fantastic realism as you penetrate the mysterious caverns. The characters are fabulous --really huge and superbly animated. While playing it's possible to get totally engrossed and end up practically having a coronary when a nasty jumps out from around a corner. The Eidolon has really set the standards for 1986 - if Lucasfilm continue to produce programs as good as this then Commodore owners are certainly in for a very happy new year!

This is Lucasfilm's fourth and probably most impressive release to date. As is to be expected from this company, the presentation is immaculate with plenty of attention to detail all round, especially in the instructions. The graphics are as stunning as the packaging and the standard of animation present is quite remarkable, unlike the sound, which is unfortunately weak, but having said that, is still surprisingly effective. Thankfully The Eidolon is as enjoyable and absorbing to play as it is to watch, with seven levels of twisting passages and evil beings to contend with. Yet another classic game from Lucasfilm, and I look forward to their next releases with anticipation. But for the moment I'm quite content with The Eidolon - excuse me...

I got very excited about The Eidolon after seeing a demo at the PCW show; I expected great things of this title and thankfully I wasn't let down. The first thing to strike you is the stunningly realistic 3D effect created by the caves moving. Usually with a program of this sort, the game itself is often sadly neglected. With Eidolon this is not the case at all. Battling imaginatively different monsters in the labyrinths of your own mind is amazing fun. Real atmosphere is created by the realistically animated creatures. Apparently Lucasfilm originally animated the different characters on celluloid and then transposed them onto the 64. The documentation accompanying the package is near faultless, and though not very detailed it gives enough information to get you started on a truly astounding adventure. There's no criticism I can think of for this game.

Presentation 96%
Nice and simple though not lacking in any way.

Graphics 98%
Most realistic 3D images yet seen on a small screen, technically amazing and aesthetically astounding.

Sound 86%
Both music and FX are simple, but the latter are extremely effective and atmospheric.

Hookability 96%
At first the realistic graphics hook you...

Lastability 97%
... and then the exceptional gameplay takes over. The urge to see what's below the seventh layer is quite considerable.

Value For Money 95%
For a now normal price an extremely above average experience can be yours.

Overall 97%
Lucasfilm's most original release yet, containing outstanding graphics and gameplay elements. The Eidolon is both immaculate in its conception and execution. Not to be missed.

Not to be missed. The Eidolon is both immaculate in its conception and execution.