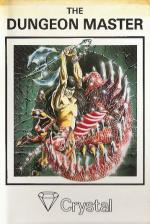 The Dungeon Master is nicely packaged with a large booklet of well thought out documentation. The concept of this game will be better known to the players of the traditional 'Dungeons and Dragons' games rather than the adventure games which are widely available for the Spectrum.

This is, in fact, the first attempt to put the real 'D&D' game onto the Spectrum. Needless to say, it uses the full 48K of memory. This is partly due to the fact that it is written totally in Basic, but also because the author has done his best to cram as much of the game onto the computer as possible. Obviously, you cannot expect a full version on such a relatively limited computer as the Spectrum.

The game is based on the development of a character whose fate is determined by his own actions. The character is trapped in a dungeon and has to conquer many challenges. Though this is a totally text game, its main difference is the fact that you can define your own dungeons as well as dangers. Hence the limits of the game extend as far as your imagination. On the tape, there is a sample 140-location dungeons for your use.

This cassette must be highly recommended for its versatility, originality and quality. For an avid adventure player this is definitely well worth obtaining.

For an avid adventure player this is definitely well worth obtaining.