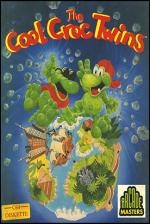 All together now: "Never smile at a crocodile, never tip your hat and stop to talk a while..." Mark "Captain Hook" Caswell risks an early death by smiling at two cool-dude crocs.

The coolest twins ever, crocs Punk and Funk are both in love with Daisy, but the silly mare can't decide who she loves most (Hmmm, this sounds familiar). So she decides to forsake love and go to a Crockery.

Meanwhile, Punk and Funk must try to win back her hand. To achieve this, they must travel through ten worlds, each comprising six screens, which makes... erm, 60 screens in all. So either play alone or drag a pal into the fun as the twins battle it out.

On each screen are differing numbers of lights: the Twins must leap around on the platforms and head-butt these to illuminate them (this takes three hits). But life's never that easy, mainly 'coz there are evil creatures out to make a few quid on handbags and shoes.

Contact with the weird and wacky denizens loses the twins a life, but the nasties can be annihilated by bouncing into them while in mid-air. Apart from killing you, the little swines have the annoying habit of bumping into the lights and switching them off. Some lights are difficult to reach: they're blocked by rocks, single arrows, double arrows, a nasty block that spins the heroes round and round (barf!) and crystals. But to ease the hassles, the Crocs are blessed with Spider-Man-style powers: they can cling to any surface (even the ceiling). Also, handy collectable icons appear from time to time, including speed-ups, bonus points and limited invulnerability.

At the end of each level either Funk or Punk (who gave the poor mites those god awful names?!) are awarded bonus points, depending on how fast they zipped through the last screen - points being given to the twin who finished first. There are 60 screens between our two reptilian Casanovas and the object of their desires. That may not sound much, but things get darn tough as the game goes on. Don't panic, 'coz it's easy peasy to start with, though my only slight moan is the strange controls. It takes a short while to get used to walking on the ceiling, but if Spider-Man can do it...

The graphics are blinkin' brill throughout, the character sprites (both good and bad guys) are small but excellently drawn. Also of note are the backdrops, which change from world to world and add a nice splash of colour.

As I said before, once the controls are sussed it's easy to bounce around the shop. There's a slight puzzle element in Cool Croc Twins, working out how to negotiate the obstacles can be pretty hair-tearing at times. But frustration is slight and I can assure you that you'll be playing Cool Croc Twins until the cows come home (or you win Daisy's hand in marriage).

What a weird game! The graphics are lousy, with a main sprite that looks like a frog in a liquidiser and backgrounds that often obscure the platforms. The joystick controls make no sense at all, but after a few plays you find there is a game in there after all!

I was sick to death of trendy-talking superpowered reptiles after the Turtles, but this offering revived my interest - well, almost! It's too poorly executed to be a top-notch Sizzler, but original gameplay and a keen sense of humour make it well above average.

What are you on about, Ian? I reckon the game's presentation is darn cool with some neat static pics and super-colourful backdrops (though the crocs do look a bit weird!). I too was confused by the strange left/right controls at first, but within a couple of goes I was totally hooked. Switching on coloured lights doesn't sound such a great concept but, as with Pang, simplicity holds the key to utter compulsion. In fact, the hectic two-player mode is also very "Pangish" with its combination of cooperation and competition to finish first and win the level bonus.

The cream on the pudding is the level password system which avoids the frustration inherent in this sort of frantic action. And with 60 tough levels, containing lots of new features to discover, there's plenty to keep you playing. Definitely one to snap up.

Those crystals will have the crocs in a spin, wasting valuable time as the nasties go turning off all the lights.

Sound 85%
Cheerful title and in-game little ditties to bop to!

Hookability 88%
Control is a mighty bit tricky to handle at first...

Lastability 90%
...But the joystick'll soon be welded to your hand.

With 60 tough levels, containing lots of new features to discover, there's plenty to keep you playing. Definitely one to snap up.