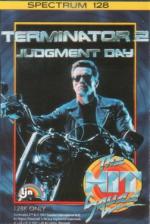 Just as Arnie's films have increased in expense and box-office takings over the years, so have his games increased in size to the extent that the last two weren't even 48K-compatible. And they almost got things right with Total Recall - obviously cos it was Arnie game they had to include a little man running around shooting things. But, with a maze of platforms to negotiate and objects to collect, the mindless violence of an Arnie film was at last woven successfully into a respectable and playable game.

Not so with Terminator 2. As the film was full of special effects, it seems Ocean decided that they should also try to give their Speccy conversion a rather special look too. Level One is a head-to- head beat-'em-up with an Arnie sprite which looks and moves so much like Arnie. Those who are familiar with the film will delight as T1000 s (the baddy's) arms metamorphosise into two spikes and try to stab you (just as they did in the film). Unfortunately, this beat-'em-up frenzy takes place at about 0.00001 mph rendering the entire level totally unplayable.

Then there's Level Two - a naff old Spy Hunter drive-your-bike-along- a-scrolling-road level. Level Three is the only highlight - another chance to have a go at a computerised version of one of those slidey puzzle games, rearranging Arnie's hand and Arnie's head. But two good levels out of seven doesn't really make much of a game. Ignore T2 and put the money towards a copy of the video instead.

Two good levels out of seven doesn't really make much of a game. Ignore T2 and put the money towards a copy of the video instead.