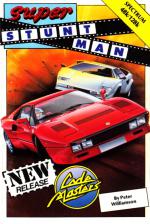 Well, ah'm just a lonesome stuntman, a steel pin through ma skull..." or something like that. Fans of The Fall Guy, where the cars are the best actors, will love the opportunity to play at being Lee Majors in this latest arcade epic. The action is fast and furious, and the script is better than the real thing. Super Stunt Man is basically a car race game, but unlike most of this type of thing, you get the chance to blast your opponents off the course and smash into solid objects. Great!

The left-hand two-thirds of the screen are taken up by the vertically-scrolling playing area. On the first level, this is a nicely-detailed desert scene, with boulders, canyons, cacti, and the odd bonfire which somehow manages to sustain itself in the wilderness. To the right of the screen are the score counter, timer, and a progressively more battered car indicating your damage level. Your aim is to complete each stage within the time limit, and in as spectacular a manner as possible. Dune buggies and racing cars speed past you firing bombs, and while you must dodge them to avoid being shunted into the fires, you get bonus points for ramming them or shooting them. You can even get a bonus for getting killed; run into a fire and you lose a life, but you get a 1000-point bonus for "great action". If you're close to completing a stage and you have plenty of time left, it might be worth it, because you get all your lives back at the start of the next stage.

The fires are pretty hard to avoid since some of them appear in bottlenecks and only the most skilful steering will avoid them. If you get stuck in a dead end, all you can do is reverse out, jam the wheel over and try to tack around the obstruction; you can't actually turn around.

Your car slips and slides across the sand, which makes the game more realistic if more difficult. Half way through each level is a special stunt which you must perform flawlessly; on level one, a ramp lets you jump over a huge canyon, if you're lined up properly for the takeoff. Otherwise, it's KERSPLATT! Don't forget to steer hard right as you land, or you'll plunge into a dead end. Complete level one and it's on to the boat chase, which isn't quite so exciting, if only because the backgrounds are so dull and there are fewer obstacles. Oddly, your damage meter still appears in the shape of a car. Caught you out there. Subsequent levels include a forest, a valley, a New York scene and a secret Grand Finale (it's secret because I haven't got there yet).

Lots of colourful action and spiffing gameplay in the mucho exciting smash-'em-up.

Lots of colourful action and spiffing gameplay in the mucho exciting smash-'em-up.