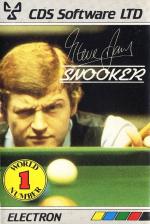 In this game you have the chance to play a few frames of snooker against Steve Davis. True, he doesn't actually appear in your living room, but even so he can play with real class and skill.

The rules of snooker are faithfully followed in this implementation, with numerous options available to players.

You can challenge another person or the computer - which calls itself S. Davis. You can give the computer skill levels between 1 (worse than me) and 9 (world champion). You can set the table speed at the start of the game to fast, medium or slow. The computer also recognises a foul shot and gives the option of passing play back to your opponent.

The direction of your shot is controlled by moving a crosshair to the desired position. The control keys are then used to select the required spin and the power of the shot.

The keys are easy to use and options are soon learned. The movement of the ball, however, is a little eractic. The cue ball may struggle to reach its target then suddenly speed away!

It is a pity that the game is silent as it would have more atmosphere with the clunk of cue on ball.

As with all snooker games, there is a problem with the colours. the table is black in this version, which means that the black ball appears as a white ring. The brown ball is red and green mixed together.

This is an adequate snooker game. Its outstanding merit is its ability to allow the computer to be your opponent. this feature gives it a lead over other versions and makes it good value at £8.95.

This is an adequate snooker game.