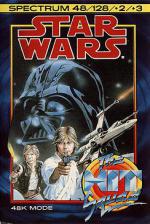 I don't like to boast or anything, but I met Darth Vada/ once - he came to my school when I was about six and I sat on his knee. Impressive? Hmm. Perhaps I should tell you about the game instead.

Well, it's a conversion of the ever-popular coin-up (from a long, long time ago in a... etc) - a 'vector' graphics job incidentally (ie spooky see-through 3D graphics). There're three main bits - firstly bombing around space in your spaceship shooting down Tie-fighters and fireballs, then zooming through the towers on the surface of the Deathstar (blowing the tops off for extra points), and finally flying along a trench inside the Deathstar shooting more fireballs, locating the exhaust port, blowing up the planet and scarpering pronto. And, er, that's it really. The entire caboodle's a 'look out of the window/fly into the screen' job. It works well (if a little jerkily) and is pretty much like the coin-up apart from the severe lack of sound - something to do with there being "no sound in space". (No, really.) Another reason to get 'peeved off' is that it's pretty simple to complete the thing, so you can easily find yourself looping round the levels quite a few times.

But not until you've had your three quid's worth out of it. (That is unless you prefer to spend your £2.99 on a cuddly Ewok instead.) [Eh? -Ed]

It works well (if a little jerkily) and is pretty much like the coin-up apart from the severe lack of sound - something to do with there being "no sound in space".