﻿ Licence To Kill (The Hit Squad) Review | Your Sinclair - Everygamegoing

Published in Your Sinclair #66 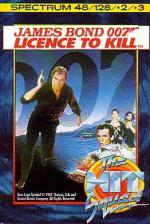 Did you know that the 00 in 007 actually means licence to kill? Oh, you did. But it still brings us neatly onto the film tie-in of the latest Bond game, featuring 007 who, as we now all know, is in fact licenced to kill. Handy, really, because killing is what you spend most of your time doing during the game.

Once again, Domark have opted for the multi-parter (but impressively not multiloader) shoot-'em-up. Part 1 has you flying up-screen in a helicopter, blasting things on the ground and hopefully not flying into any buildings whilst you're at it. Complete this, and Part 2 is more shoot-'em-up stuff, this time at ground level on foot, involving you shooting baddies. One nice touch (but which makes things harder) is that instead of simply firing straight, you're given a gunsight which can be rotated around.

Level 3 sees you having to attach a tow-rope to the back of a moving helicopter or something - Dr B didn't make it too clear in his review (where he scored it 79), and I haven't had a chance to, er, check out this level yet (which is followed by a few more in which James does a spot of swimming water-skiing and blowing up army trucks).

All the other Bond licences before this one have been rubbish, but not so here. Each part is a good little game in itself - totally unoriginal of course, but certainly worth the 50p which is effectively what you're paying. And as they are neatly tied together, the prospect of a completely different level once you've completed the last will keep you playing as well. Er, right. Why not buy it then?

All the other Bond licences before this one have been rubbish, but not so here.