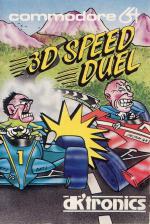 Speed Duel is a very simple race game involving yourself and a computer car. You can select the speed at which your opponent travels, the number of laps and the difficulty level. Once you've done that, you can start the race.

The idea of the game is simply to beat your opponent to the finishing post before losing all of your five lives (a life is lost either when you run off the track or when you hit your opponent). After finishing the race you are given a bonus for doing so and you may enter your name in the score table.

The track isn't a set one but gives random corners that are announced by signs with arrows on them.

The graphics and sound of the game are really awful with terrible track perspective, flat tunes and unrealistic car control. I was amazed to find that the game is only about a year old - I thought it was a *really* early Commodore game. Even at its cheap price, it doesn't offer good value for money and there are infinitely better racing games available.