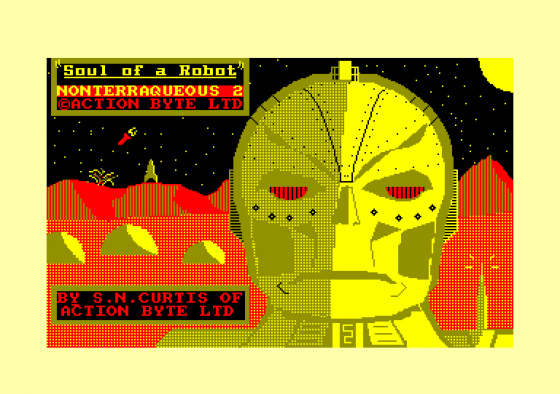 This game is subtitled Nonterraqueous 2, and is in the same mould as that other cheapo cracker with 256 screens full of colour, movement and challenge. The seeker in the original game apparently failed in its mission and now a robot with the mind of a man has been sent on the same mission. The trouble is his soul is in torment and he wants to commit suicide by destroying the evil computer. A manic depressive robot. Where have I heard that before?

The screens are similar to Nonterraqueous with lots of colourful scenery occupying them. At least one side of the screen is open as an exit but sometimes all four are available. The big difference is in the method of getting about the screens - instead of flying the robot walks and jumps. This brings the platform game element to the action that is still mostly about charging around lots of screens blasting aliens on the way.

The screens are arranged as a 16x16 maze subdivided into three sections. The evil computer is in section three and to get to it you have to crack through the previous two sections. In each section a transporter key has to be found and taken to a labelled transporter room, allowing you to access another section of the maze. 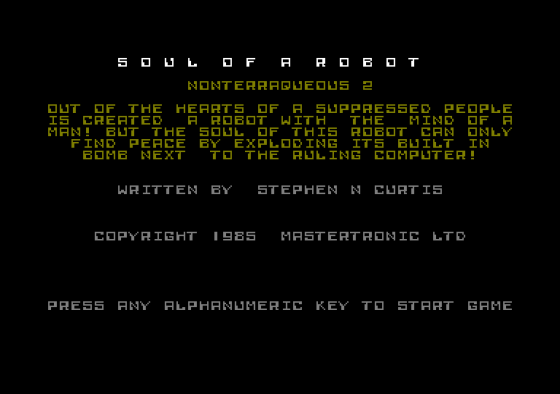 Most screens have a variety of platforms in the form of clocks, torches, rocky outcrops, RIP signs and chained up prisoners. These can be jumped on and walked upon but care must be taken since a fall from great height will result in the loss of a life. The strength of the robot's jump can be adjusted between five settings for different lengths and heights of leap. Failing that, the robot has a limited flying power, although this used up psyche power and if this reaches zero the game ends.

Psyche can be replaced by shooting the aliens that appear on every screen. First ou have to find the laser though. The aliens will cause problems since they get in your way and can knock you out of the air if you're in the middle of a leap. Shooting them only gets rid of them temporarily and even the explosions can be bumped into stopping your progress.

Another danger that faces the robot are little toadstools of deadly fungi which prove instantly fatal if touched and have to be leapt over. Disappearing floors are another hazard and unless you time your progress across them right it could lead to a long fatal drop, at the end of which the robot's head drops off at his feet.

At first the controls may prove frustrating as you try to combine walking, jumping and flying at the right moments. This can lead to lots of futile bouncing around and death falls as you try to get the hang of things. After some practice though you should be able to get about quite fast. The other crucial thing is to make a map as you go along because otherwise the scenery starts to look all the same and you'll get totally lost.

N. Controls are immensely frustrating at first.
N. Not too much puzzling involved.

There were some very nice graphics in this program - slaves bearing platforms on their backs, the robot's head dropping off. The leaping robot moves not quite as smoothly as his Predecessors in Ultimate games, but you have to expect a bit of rough in a £1.99 program, don't you? Overall, I found this even more compelling that Nonterraqueous mainly due to the wittier graphics and the extra movement. It's certainly another one for the mappers.

256 colourful rooms, great shooting action and every bit as testing as its predecessor. 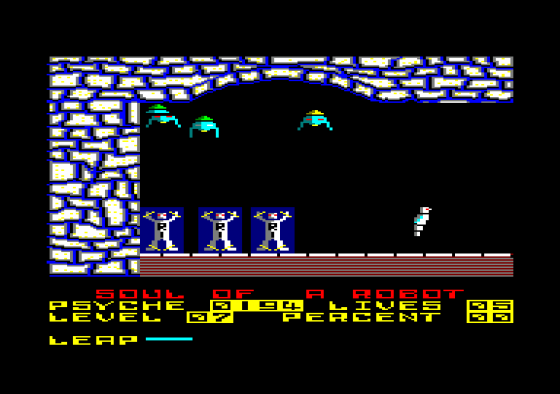 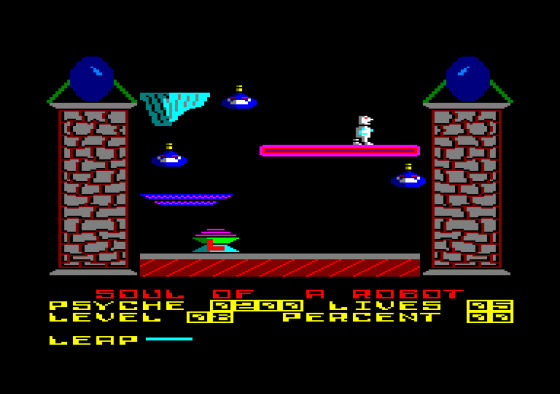