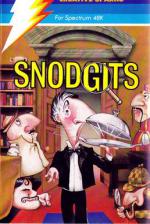 Snodgits, or Did The Butler Do it? as it could be called, is a classic Whodunnit from Sparklers. Menace is afoot at Mystery Mansions as objects go missing causing chaos in the Snodger household. It's not that the objects are particularly valuable but the whole business is making life a misery for Benson the trusty old Butter. What is he to do when Lord Snodger asks for his slippers and they are no where to be found? Life would be all the more simpler if these odd occurrences could be blamed on the mischievous Snodgits, pets of the Snodger family as they are always making mischief. However, Benson, who has a nose for these things, is doubtful. Such is the problem that an impressive array of prestigious Detectives and Detective-esses have assembled at Mystery mansions to try and discover who the culprit is. But are they all as blameless as they would like to suggest? While everyone else is running around in ever decreasing circles trying to get to the bottom of the matter, Benson plods steadfastly onwards in his own inimmitable fashion trying to clear his own name as much as an ing else.

Benson must trudge around Mystery Mansions trying to locate stray objects that are required by the Snodgit family. Clues to what these objects might be are given to Benson by the loveable Snodgits. For example, one might approach Benson and say, Daphne wants the candlestick and Benson must try and find out where it has been mislaid. Mystery Mansions is not small by Stately Home standards with over 200 rooms. Benson's task is aided by a map at the bottom of the screen with the butler represented by a green square and the sought object by a purple square. Maybe the object is carried by someone else? Or it might be on another floor whatever, poor old Benson must battle it up and down the stairs in search of it.

Once the correct object has been given to the correct person. Benson gains access to the Clue Table. Now he can begin the task of finding out who is responsible for the disappearing objects. The Clue Table is two blocks of rows and columns showing a list of objects and suspects. Each row of suspects relates directly to the objects shown. A question is asked such as, Who snodged the Teapot? and Benson, using his Butler 's intuition must decide who the guilty party might be. If he makes a wrong guess then he must deliver another object or find a Snodgit to snodge with. However, if he makes the correct link between object and suspect then the guilty person is automatically put into the guilty box at the bottom of the screen and Benson can scurry off to find a detective. Three people in the game are guilty and they must all be identified before you can move on to a higher level.

If you get fed up with the present lay-out of Mystery Mansions you can choose a new location by restarting the tape after the main part of the game has loaded. Each of the 5 Mansions have over 200 rooms and each level has a higher number of floors which must be examined.

Have you brains enough to assist Benson discover who is the thief of Mystery Mansions, or will it remain forever a secret?

'Snodgit seems to me to be one of the most original games around at the moment, and in a budget range as well. The whole look of the game is very pleasing with lots of large and excellently animated characters in a small, but well coloured maze. It's a pity that all the mazes couldn't be loaded in memory at once, but it does remember the last High-score after loading. Once the Instructions had been fully read I found the game a pleasure to play and very addictive. The sound is not the best in the world but the playability more than makes up for it. This is definitely one of the better budget games around at the moment.'

'This one feels a lot like Popeye as you control the same sort of large character, the main difference being that you are playing in a 3D area. The graphics are not as clear as they could have been and as a lot of colour is used there am many attribute problems. The characters are well animated and detailed, but the sound is poorly used there are only a few spot effects every now and than, this is a shame as it would have added to the atmosphere of the game. Generally Snodgits is a very good deal for two quid as it is compelling and playable.'

'What an instantly pretty game, much prettier than the average budget release and I suppose that is just what is supposed to attract the end user into purchasing it. Graphically Snodgits is really very good, especially the Snodgits themselves, what a cute, but oft annoying, race they are! Animation is very well employed on top of the big bright backgronds. The game itself is slightly cludoesque but a bit more original than that, providing a good laugh for any Spectrum gamester. Have a quick look at this one as you may well be surprised after the lower quality of Creative Sparks other releases.'

The game itself is slightly cludoesque but a bit more original than that, providing a good laugh for any Spectrum gamester.