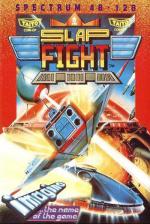 Passing over Orac in the Slapfighter, a multidirectional starcraft, you are attacked by aliens. Their weapons home in on the Slapfighter, so constant movement above the vertically scrolling surface of the planet is essential if you're not to become easy meat. (The spacecraft has four lives.)

For protection the fighter carries a forward-aiming blaster, and more weapons can be added by flying over the stars revealed when certain aliens are destroyed.

Other advantages - extra speed, side fire, bombs, homing missiles, a temporarily protective shield, and a wing unit that improves fire power but increases the craft's size and vulnerability - can also be picked up.

Destroying the aliens and their works earns points, as astute readers might have predicted.

'There's only one fault I could find with Slap Fight: you can't see the pesky bullets. The shading on the intricately detailed landscape is superb, and with the super-smooth scrolling makes a very attractive game. The playability is improved by extremely accurate collision-detection and the chance to control your ship at your own speed. The weapons are fun and the aliens move beautifully in excellent formations - Slp Fight is certainly one of this month's most addictive blast-up games.'

'Slap Fight is an extremely dubious shoot-'em- up. It looks like Probe Software used the same code for the scroll and the score line as they did for Xevious - but like that US Gold game, this has poor graphics. Slap Fight becomes frustrating because the enemy missiles are so difficult to see - it's very easy to die with no idea how it happened! Incidentally, if you choose SPACE as the fire key you can't choose another select key, which means every time you fire the computer selects the current option. Annoying. Slap Fight is a disappointment, but fans of the Spectrum Xevious conversion might find it reasonable.'

Slap Fight is a disappointment, but fans of the Spectrum Xevious conversion might find it reasonable.