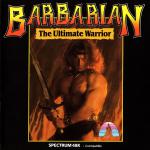 Hardly a month goes by without a fighting game appearing on our review pages. However, amongst all the oriental offerings Palace's latest release takes us into the age of mythology with a beat 'em up featuring great hunky swordsmen, evil guardians and strange man-eating creatures.

The background is straight out of any Boys Own action story, telling of Drax, an evil sorcerer, who's lusting after the beautiful (and very wet) Princess Mariana. Unless she's delivered to him he shall unleash his unspeakable wrath upon the people of the Jewelled City. Drax gives only one alternative - the Jewelled City must offer up a champion to defeat his own.

Champion after champion is defeated and the Jewelled City is losing hope, when, from the forgotten wastelands of the north, comes a mysterious barbarian willing to take on the awesome task. And guess what? That's you.

Barbarian comes in two parts, loading in no particular order. The first is a combat practice routine for one or two players, designed to help you get to grips with the fighting moves and assess the strength of opponents. The second is a Fight to the Death - the real game where the Princess ' future is at stake and where you eventually come face to face with Drax himself.

As each foe is defeated (literally by knocking his head off), a small lizard-like creature ambles across the screen, kicks the severed head aside and drags the body off to prepare for a feast. Tasty.

On the final screen you have to fight the mighty Drax. He's is no swordsman and launches into battle by hurling bolts of magic; these should be avoided to the best of your ability and a physical attack launched. With Drax defeated, Princess Mariana is saved and shall probably want to marry you (or something soppy like that).

'Yeah! Now this is what I call a real slice 'n' dice fight. The graphics are realistic, the backgrounds convincing and (best of all) there's proper movement (like heads coming off) - games this really bring out the animal in me. The program itself is very simple in construction, but it's all brilliantly executed and very addictive. I loved the way the little character comes on at the end of a battle, kicking the loser's head off the screen and pulling the body behind him. Barbarian is easy to escape in, and hard to get from. Worth the asking price, without a doubt'

'Make 'em bleeds, beat 'em ups or whatever they're called nowadays... I love 'em, especially when they're as beautifully programmed as this. A few more characters and backgrounds wouldn't have gone amiss, but this still compares well with Palace's other releases. What characters are there are excellently animated and well drawn, and the grounds are also pretty neat. I'd say that this is one of the best beat 'em ups on the Spectrum so far, even if it is a little expensive.'

'Just as we were thinking that no-one would have the audacity to release another beat 'em up, along comes Palace with Barbarian - and it's remarkably impressive. The package is very professionally put together, with a combat practice game and the actual event both included. The animation is so slick that the characters appear to have a little life of their own as they roll around. One of Barbarian's most pleasing elements is the sense of achievement as an opponent is defeated. Mastering Barbarian will take some time, but well worth it.'

One of Barbarian's most pleasing elements is the sense of achievement as an opponent is defeated. Mastering it will take some time, but it's well worth it.