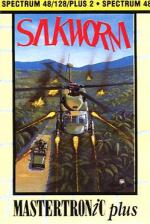 Although Silkworm, sideways scrolling shoot-'em-up number 92150430702, is hardly the most original game on the planet, it certainly is one of the corkiest. The world is about to blow up and only you, dear reader, can stop it - by flying along in a helicopter and shooting things. And should a friend be coming round for tea then he or she can help by driving along in a little jeep at the bottom of the screen at the same time.

Everything is beautifully clear and moves around pretty convincingly (including your sprite). There are plenty of different baddies along the line, including other choppers, blobby things, funky little jobbies which join up in mid-air into a sort of goose, missile launchers, strange spikey things on the floor and a unfeasibly large chopper at the end of each level.

And it's blimmin' addictive, I can tell you, matey - I've just spent all evening playing the thing when I should've been writing this pesky review instead (ahem). Well worth three quid out of anyone's pocket (except for mine, of course).

Blimmin' addictive... Everything is beautifully clear and moves around pretty convincingly.