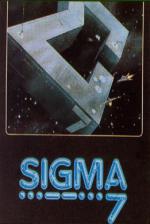 A long time ago, in a galaxy just around the corner, a great adventure took place... (cue music, dah-daannnn!)... The Evil Sigma Empire despatched its seven great warfactories (Sigma Seven), on a journey towards Sol III, called Earth by its inhabitants. En route towards the blue planet, the warfactories were creating the strike force that would lay Earth to waste and press its people into slavery... (gasp) But little did they know that Earth's advance warning system on Pluto had alerted deep space defence ships, which were sending tiny interceptor vessels to meet the Sigma Seven, just outside the Solar System...

First they had to tussle with the robot fighters which buzzed around the warfactories like insects. The Earth fighters examined the trajectories of the robot fighters, and picked them off, swerving to avoid ones they missed ('cos they exploded on contact!) Having landed in the factories, they released a small manned tank into the innards of the great war machine. Winding its way around the corridors the little vehicle destroyed the robot mines, protecting the computer codes to the self-destruct mechanism. Sure enough, embossed on the floor of an intersection, they found the configuration code. Memorising it, using their specially hand-carved brains, they pressed on to the very nerve centre of the mighty ship. Skillfully avoiding the sensor mine positioned over the buttons, they punched in the code to the ship's master computer... and waited...

Cor, what an epic space game this is! I tell you, you'd have to go many a long parsec before you'd stumble across a shoot 'em up as good as this one. There are seven warfactories, (or levels) and each has three stages. The first stage is the flight towards the factory from your base ship. You fly, Zaxxon style, towards it, firing the brilliant white laser blasts (which seem to burst through the attribute problem as if it wasn't there) at the onrushing robot ships. The distance between your base and the factories gets longer as you advance through the levels, so you'd better get a lot of practise in if you want to get into the meat of the game and don't want to end up as a splash of pixels drifting through space!

This is a fabulous game, to be perfectly honest. It's a real arcade challenge, firstly and formostly, but as well as this, it's a tough test of strategy and a fiendish way of stretching the muscle between your ears. The graphics are colourful and very nicely rendered, with a sharp eye for minimising attribute clashes and maximising the special effects - the slide which covers the screen between scenes, scratching up and screeching down, is brilliant to watch and an effective break in the action.

The sound hasn't been forgotten either, with a foot tapping signature tune, and rasping sound effects.

This is one game I recommend you play immediately. If not sooner!

A real arcade challenge. This is one game I recommend you play immediately.