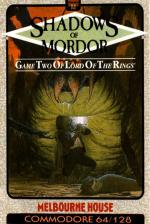 Shadows Of Mordor was one of the new titles previewed last month. When I had the pre-production demo in my hands, I felt that there was hope yet for Melbourne House. However, one or two things have happened to give me cause for doubt. Is it really worth following on from Lord Of The Rings, for £9.95?

Well, on the C64 the game is still very slow. It's not just that the program itself is often updating the other characters; it also gives itself so much to do. Do we really want to know everything that Sam is carrying as we move about the map?! That, surely, is what the INVENTORY command is for. Why bother to print out such long inventories (and there's a lot to carry in this game) unless we ask for them.

Similarly, the parser seems to make very heavy weather or even the simplest inputs. For example, on the east bank of the river, EXAMINE BANK gets you FRODO DOESN'T SET ANY BANK TO EXAMINE - and this blindess if often repeated. In fact, I could give you a short but amusing list of inputs and responses - here we go, playing Frodo:

...and more's the pity, I say. At any rate, we obviously have a viciously masochistic Frodo who is obsessed with cliffs.

As for the graphics - well, they're a great disappointment. On my version they loaded from disk, but didn't seem to be any the better for that. Certainly not a patch on The Big Sleaze.

Really the only good news is that, unlike Lords Of The Rings, the game didn't crash while I was playing it and that the puzzles are okay - I quite enjoyed solving them and they do offer some variety. However, I thought that one or two were just a little obscure - especially the one near the beginning of the game where you have to make Smeagol promise to be good. I don't see many people getting that one for a while (unless they read this).

I also can't see many people putting this game on the front of their shelves - the rear for reference, perhaps, but it doesn't seem destined to share the fame (either for good or ill) of its predecessors.

Graphics are disappointing and, really the only good news is that the game didn't crash while I was playing it and that the puzzles are okay.