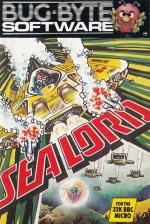 The ghostly voice of the Sealord reverberated through the deep: "So you have sunk my Shell Fighters, my Smart Mines will finish you off." And they did!

In Sealord, one of the latest offerings from Liverpool-based Bug-Byte, you find yourself in control of a submarine when you stumble into the Sealord's underwater empire. Immediately you are under attack from one of many waves of the Sealord's henchmen.

Your submarine is controlled by two keys which rotate the sub anti-clockwise and clockwise. When the key is released the sub travels in the direction it is facing. I found it almost impossible to manoeuvre the sub with any degree of accuracy and found the haphazard way of moving very frustrating.

Graphically the best part of the game is when you get zapped by an alien. The rocks on the seabed, which resemble blue and white rectangles, flash in a gratifying way as the explosion rocks the screen.

A bonus to the game is a 3D effect to the rocks enabling you to disappear when you sail behind them. The aliens can also do the same and can catch you unawares.

Sealord, one of the latest offering from Liverpool-based Bug-Byte, runs on the BBC Model B at £7.50.

I found it almost impossible to manoeuvre the sub with any degree of accuracy and found the haphazard way of moving very frustrating.