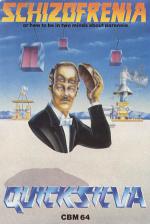 Schizofrenia is a game that will put you in two minds about paranoia (ho! ho!), well that's roughly what it says on the inlay anyway. You take the role of one Alphonse T Nurd, flunky and cleaning minion to Bogdan Schtunk, a run of the mill mad scientist. Alphonse, discontent with his menial position, dreams of one day becoming a great scientist. So, during his nighttime cleaning shift, he attempts to learn as much as possible about his employer's line of work.

One night, while Alphonse is playing at being a scientist, he stumbles across his Dr Schtunk's latest invention, the Atomic Particle People Splitter. He unwittingly activates the machine and is promptly split into two separate people, Alphonse I and Alphonse II. Oh dear. Alphonse I quickly realises his mistake and that he must get himself and his double to the Recombination Chamber so they can become as one again. To get there he must travel through the five areas of Dr Schtunk's lab complex. Unfortunately for Alphonse I, Alphonse II isn't quite so keen on the idea, as he is enjoying his newfound freedom and will attempt to hinder his alter ego's every step. To make matters worse, if the labs aren't clean by first thing in the morning, then it's the sack for Alphonse T Nurd - both of them!

The five areas of lab are of the platform and ladders format and each features a certain type of 'logic puzzle' to be completed. You actually control Alphonse I and compete against Alphonse II using either joystick or keyboard. Loading is briefly interrupted to allow you to choose the control method and there's no way of changing this once the program has loaded (other than re-loading).

On the first screen, appropriately titled Area One, you have to open the main doors leading to (surprise, surprise) Area Two. This involves undoing four bolts holding the doors shut and pulling back a lever to swing them apart. Score and timer controls must also be set by toggling the correct switches below their respective panels. If this all sounds too easy, then bear in mind that while you are doing this, Alphonse II wanders about the screen attempting to reset any work that you've done.

Should you be unfortunate enough to bump into your alter ego, he will give you a swift kick in the leg to send you on your way, before continuing on his. If you encounter him on a top landing however, he's more than likely to send you crashing to the floor, costing you one of your three lives.

Area Two has you moving several little yellow boxes to the top right of the screen by using a set of lifts in the middle. You can only move so many blocks at a time and the correct lift controls must be activated if they are to work. Area Three requires plenty of thought, as you have to line up six sets of lifts at the bottom of the screen and they only move in sets of three. The penultimate screen, Area Four, is another logic problem with the task of turning on all the lights in the room. Before you can do that though, the generator has to be turned on and to make things that bit more awkward, one of the light-switches has been wired upside down!

The final screen contains the Recombination Chamber itself and features yet more switches and frustration. A series of generators need to be turned on to activate the machine so that Alphonse II can be lured into it and the two bodies combined to form one.

There are two major problems with this game. Firstly, there are only five different screens and secondly, they're far too difficult. Making a game harder, to compensate for a lack of levels is one thing, but Schizofrenia is just fastidious. This is unfortunate since it's mainly the control of Alphonse that is a pain - the problems posed on each screen aren't.

From the once great Quicksilva comes an adventure of unusually limited scope. It has five screens. And five relatively unchallenging screens at that. Control over Alphonse is abominable, involving pixel perfect positioning before any move is made. The program is so finicky it is unbelievable. Time after time Alphonse tumbled off the staircase for no apparent reason. The backgrounds, though fairly detailed, are muddy and the use of porky expanded sprites makes the animation look particularly crude. Overall, despite the relatively interesting scenario, Quicksilva must be the ones suffering from mental disorders.

This is a rather strange game. When you first see it, the things that quickly attract your attention the most are the two Adolf Hitlers goose-stepping (or doing the Can-Can) around the screen. The game is a bit of an oddity too - you spend the whole time rushing around the screen pulling and pushing switches which your twin brother promptly goes and mucks up. There's not much depth in the game either, as there are only five screens to complete before you start again on a higher level. It provides a few hours of fun, but is nothing particularly special.

Presentation 49%
Decent packaging but game lacks in appearance and options.

Graphics 57%
Quite crude both in definition and animation.

Sound 39%
Poor tune and run of the mill sound FX.

Lastability 44%
Despite tough and imaginative puzzles there are only 5 screens.

Value For Money 54%
There's not really enough on offer even for the reasonable price.

Overall 50%
We'd be in two minds about recommending this one.

Despite tough and imaginative puzzles there are only five screens.