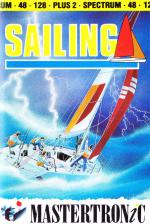 Hmm, curious game. As you might have guessed from the title its a simulation of sailing a yacht. First design your own yacht by altering things like the height of the mast and what the hull is made of. If you're not very experienced in the sailing business then just make the biggest boat possible (like me)! Once you're satisfied with your creation choose which country you want to be and which to race against. Fun so far, eh?

The designing bit is a piece of cake compared to actually controlling the bleedin' yacht (excuse my French!). It seems to have a life all of its own. All you have to do is complete the relatively simple task of sailing around three buoys and back, but for me it's an impossibility.

Varying weather conditions make matters worse, with winds coming from all directions blowing you off course. Once you get the hang of the controls things brighten up a bit, but I still think there should be more to the game than just this.

Sailing was originally released in 1987 and got 76% from Richard, Ben and Paul who said it was a highly playable simulation. Maybe then, but I'm afraid this isn't going to keep me playing for very long now.

Originally released in 1987, it was then considered a highly playable simulation. Maybe then, but I'm afraid this isn't going to keep me playing for very long now.